The United Asia Management has announced that they will be attending the 16th ‘Busan International Film Festival’ (BIFF) to establish Korea’s first ‘talent meeting’.

The BIFF will be holding a press conference at the Lotte Hotel in Seoul to provide details on their new annual talent meeting event.  Artists under the six agencies included in the United Asia Management (SM, YG, JYP, Star J, AM, Key East) will receive the opportunity to meet with directors and producers for a casting opportunity at the ‘talent meeting’.

The United Asia Management previously expressed plans of using each other’s resources to advance the entire entertainment industry of Korea, and they seem to be doing just that.  Aside from ‘talent meetings’, the giant will also be throwing networking parties to allow natural communication to flow between artists and major officials in the film industries across Asia.

A total of eight idol groups will be judging the qualifying rounds of MBC‘s ‘Cover Dance Festival K-POP Roadshow 40120′, which will take place in various parts of the world.

The show will cover five continents and ten countries, including Russia, Brazil, the U.S., Japan, and Spain. ’40120′ refers to 4,0120 km, which is the distance the idols will travel to experience K-Pop dance covers as judges on the show. The idol groups participating in the show include KARA, 2PM, miss A, SHINee, B2ST, MBLAQ, f(x), and T-ara.

MBC announced, “This show will fall into a new genre, ‘Entertainment Documentary’, which is a combination of a variety show and a documentary detailing the idol groups’ hands-on experience with the popularity and the reality of K-Pop”.

END_OF_DOCUMENT_TOKEN_TO_BE_REPLACED

After a successful debut, rookie boy group B1A4 is set to make a comeback with their upcoming mini album titled, it B1A4. Building up the anticipation, they have released a series of teaser photos including leader Jinyoung, Baro, CNU and Sandeul. Now with only with one member (Gongchan) to go, the tracklist for their 2nd mini album has been revealed.

Consisting of 5 songs, this mini album includes songs that the members have participated in themselves, from writing the lyrics to the creation of the song. In addition to that, Oneway‘s Chance lent a helping hand in creating of one of the tracks, My Love.

END_OF_DOCUMENT_TOKEN_TO_BE_REPLACED

American hip hop musician Ludacris, who will be making his way to Korea for the very first time on September 19, has revealed that he’s been invited to visit and meet up with officials from YG Entertainment. Ludacris previously expressed his interest in the K-Pop market and praised YG Entertainment’s level of influence and musical power in an interview.

Officials of the label thanked Ludacris as one of the most world renowned traditional hip hop musicians for taking interest in their music. Ludacris’s hopes of earning an opportunity to work with the label just might come true through this unique meeting between the two giants.

YG Entertainment has been taking steps towards marketing their music outside of Korea lately, especially with the establishment of “YGEX” with Avex Entertainment and working with Will.I.Am. Adding Ludacris to the list, this only means more exciting things to come for fans of the label!

Big Bang’s G-Dragon was chosen as the #1 ‘idol that makes a lot of money’.

On MBC’s Everyone “Weekly Idol” broadcast on the 10th, the results of a survey titled, “Powerful money force! Rich idols BEST10“, will be revealed.

For this study 90 idols that are currently active were directly involved in the survey and were asked to reveal their most honest answers.

In this survey, the #1 idol picked was Big Bang’s G-Dragon. A lot of idols said, “G-Dragon has the most royalties (copyright fees)“, MBLAQ’s G.O was cited saying one of the reasons was, “He is the one icon.“, showing praise in his words.

The movie Wan Deuk, which held its production report conference on the 6th at 11:00 a.m at a CGV in Gangnam, Seoul, became one of the hot keyword searches in various portal sites.

The appearance of actor Kim Yoon Seok and Yoo Ah In, who became popular in KBS 2TV’s Sungkyunkwan Scandal, are getting many viewers excited. Yoo Ah In is creating a stir by appearing as a rebellious teenager that is contrary to his usual weak image.

The production crew said that the movie will be a big hit. The movie Wan Deuk will premiere in October.

Yang Hyun Suk revealed that there were once plans for a Big Bang + Jay Park unit.

Yang Hyun Suk astounded the viewers by saying, “This is the first time I’ve revealed this secret, but during the beginning stages of Big Bang, we were thinking about having a separate G-Dragon, Taeyang, and Jay Park unit“. He further explained, “But in the end, separate teams were formed due to their busy schedules, and they weren’t combined“.

J.Y. Park also talked about what it was like to engage with Yang Hyun Suk on a program stating, “In addition to liking him as a person, I think that he is a producer who has a good sense for things and is better than me in certain areas, so collaborating with hyung is quite enjoyable for me“.
END_OF_DOCUMENT_TOKEN_TO_BE_REPLACED

J.Y. Park and Yang Hyun Suk recently participated in a fun game that had them name artists they’d scout from each others’ companies.

On September 7th, J.Y. Park and Yang Hyun Suk guested on SBS‘s ‘One Night of TV Entertainment‘, during which the MC asked, “Which singers from the other agency would you like to scout?”

J.Y. Park answered, “There is one person who I would like the most,” and named 1TYM‘s Teddy. He explained, “I don’t just want him as a celebrity — I’m thinking that he would produce songs for other singers, too.”

J.Y. Park picked Big Bang‘s Taeyang as his second choice, stating, “He’s so good at dancing and singing, so I think it’d be fun to record together.”
END_OF_DOCUMENT_TOKEN_TO_BE_REPLACED 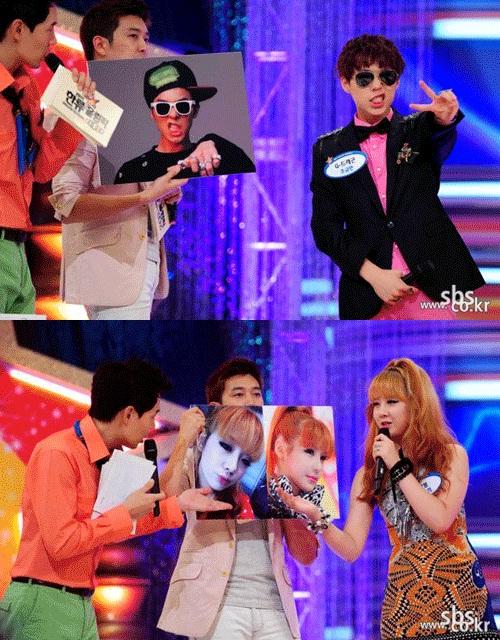 Hallyu Olympics is one of SBS’s special shows for this coming Chuseok. In the show, Korean celebrity look-a-likes chasing the Hallyu wave from all over the world will be featured. The participants will show their talents to find who is the closest to their doppelganger. Here’s a photo of the G-Dragon look-a-like participating in the contest:

Info from Starnews via allkpop
Photo as tagged via Bestiz
Source : bigbangupdates.com

His reply to @RaganFerguson was for this tweet:
#WhyImSingle because @Realtaeyang hasn’t met me yet(: 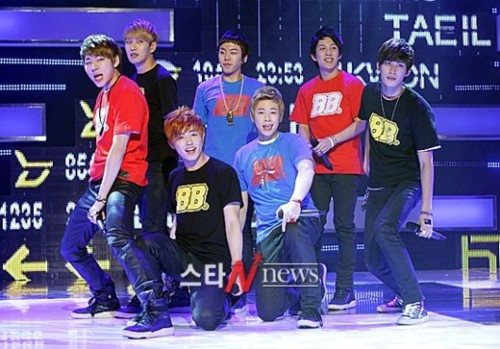 [YUMI] Preparing a late snack..where will it be delivered to? http://yfrog.com/h6c6qoej

[YUMI] The answer is!! The recording studio at Stardom where Block B is recordingㅋㅋㅋㅋㅋ Whose hand is that reaching for the chicken shish kabob? http://yfrog.com/nys30rpj

[YUMI] And the hand you can see barely is baby Taeil ㅋㅋㅋ They’re so cute eating well like baby birds..it’s rewarding^^ㅎ The other kids are too focused on recording, so I couldn’t take a pictureㅠㅠ

[YUMI] A lot of people asked, so I’m going to reply in saying that Block B’s new song is really daebak. It was a song I really coveted..as days pass by, these kids grow even more amazing!!!!!

[ZICO] Today’s directing is up to here..going to the hair salon after an hour of sleep.

[KYUNG] When losing all wealth & skills, who will be beside us aside from family. Those who read this, I hope you deeply think about this. Going to sleep for an hour before going to the salon.gd nite