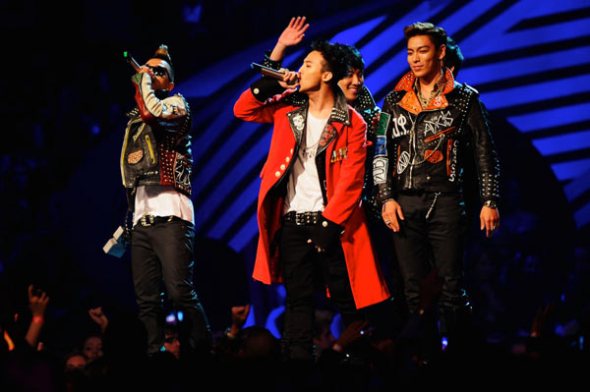 Just like MTV Korea, MTV Southeast Asia will be playing “BIGBANG Specials”, in celebration of the group’s win at the MTV Europe Music Awards. MTV will be playing old clips of BIGBANG from their live performances to interviews and their music videos. Here’s the schedule:

END_OF_DOCUMENT_TOKEN_TO_BE_REPLACED

This isn’t the first time Namie faces such charges. She had a similar case pop up over her song “Black Diamond”, when it was linked with being familiar to Janet Jackson’s “Feedback”.

Critical netizens have been taking to the net: “Another one copied?”, “The melodies are almost identical”, “We’re both Japanese, but I can’t deny and protect her”, “Why copy k-pop out of all things?”. On the other end, some are supporting the singer: “Totally different”, “A bit of a stretch to say it’s plagiarized”.
END_OF_DOCUMENT_TOKEN_TO_BE_REPLACED

What’s Up Premiere Date on MBN

MBN hasn’t released its final program schedule yet but it looks like we finally have the premiere date of Daesung‘s musical drama, What’s Up. On Naver, when you search for a drama, the duration or the date the series will air or aired is usually shown. As you can see below, the date for What’s Up (왓츠업) is December 3, 2011:

END_OF_DOCUMENT_TOKEN_TO_BE_REPLACED 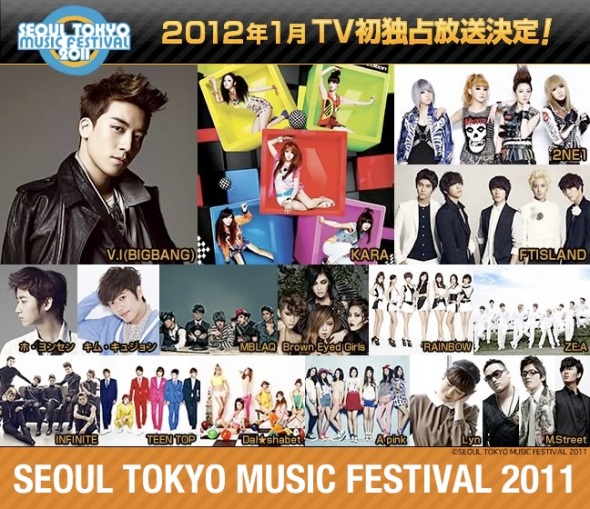 Last year, SBS also broadcasted the show in Korea but no sked announcement from them yet. Seoul Tokyo Music Festival 2011 will be held today at Saitama Arena at 5PM.

They beat off competition such as Britney Spears (representing the US) as well as artists Lena (from Germany), Restart (from Brazil) and Abdelfattah Grini (from Morocco).

Last.fm Trends looks at Big Bang’s scrobbles to see just how much they have exploded.

The formation of Big Bang was documented on television in 2006, with the band going on to release five studio albums and five EPs – with some of them targeted specifically at the Japanese market.
END_OF_DOCUMENT_TOKEN_TO_BE_REPLACED

SNSD‘s Jessica honestly opened up about the dating rumors between herself and 2PM‘s Taecyeon.

The November 9th episode of MBC ‘Golden Fishery – Radio Star‘ was a ‘Musical Star’ special, and stars like Park Hyemi, Lim Tae Kyung, and SNSD‘s Jessica, Taeyeon, and Tiffany guest-starred on the episode.

The MCs questioned Jessica about her relationship with 2PM’s Taecyeon, as they have been frequently spotted together throughout the city.

In regards to the paparazzi photos she said, “We’re just friends. He’s a very close oppa of mine.”

END_OF_DOCUMENT_TOKEN_TO_BE_REPLACED 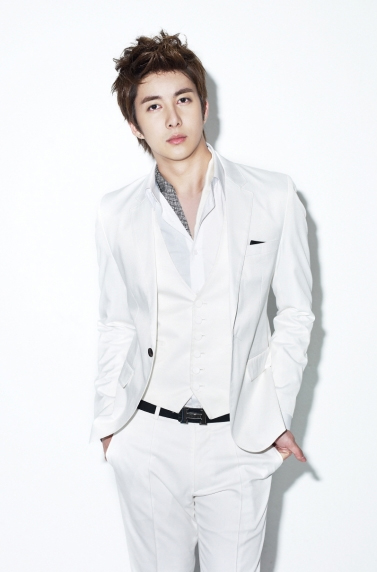 Singer Kim Hyung Jun who has received much love from fans as the maknae of SS501 and now as a solo artist has been cast as the main male character in a new mini-series. The mini-series will air on KBSN and is titled, ‘She’s Completely Insane‘.

He will be playing the role of the chic and edgy top celebrity named Kang Min. He has tossed aside his suave and adorable image, and transformed into a tough and masculine character for his new role.

‘She’s Completely Insane’ tells the story of a star, a producer and a director, and the love story that develops in the midst of their careers. Director Lee Jung Pyo who has worked on major projects such as ‘Quiz of gods 2‘ and ‘The Original‘ has taken on this new mini-series, heightening viewers’ already-high expectations.

Hanteo, one of the top album sales monitoring charts in Korea, has released their ’2011 Singer Award’ rankings.

As expected, idols dominated album sales this year due to their large, dedicated fan bases. In addition, the top 5 are all male idols, with Kim Hyun Joong being the only male solo artist out of the five.

This chart is scheduled to be updated until the end of this year. However, with less than two months left in the year, it’s not likely that the rankings will change (with the exception of TVXQ and Kim Hyun Joong who are currently neck-and-neck). 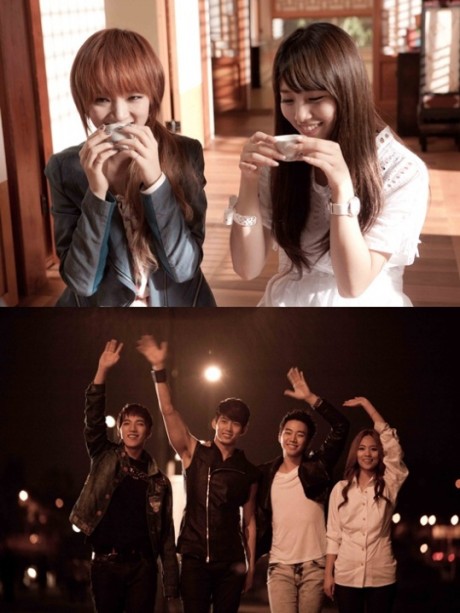 The interactive movie ‘Hello‘ starring 2PM and miss A has finally been revealed via Korea Tourism Organization‘s website, www.ibuzzkorea.com.

In the video, the viewer becomes the main character and goes on a vacation to Korea for three days with the idol stars. The video highlights some of Korea’s most beautiful landmarks and the OST “Hello” was created specifically for this project.

In the online version, the viewer can decide in the beginning if they want to ‘travel’ to Korea with 2PM or miss A, and upload their own photos onto the site to ‘take’ their own photos with the stars.

The Korea Tourism Organization created the interactive movie as a part of a campaign to bring more tourism to Korea, and the video can easily be shared via social networking services such as Facebook, Renren, etc.

END_OF_DOCUMENT_TOKEN_TO_BE_REPLACED

Hyped as one of the biggest audition shows yet, SBS‘s ‘Survival Audition K-POP Star” (or “K-POP Star”) finally saw all three of its judges record an episode together for the first time.

On November 7th, Yang Hyun Suk, J.Y. Park, and BoA came together as judges and representatives of the ‘Big 3′ agencies in Korea (YG Entertainment, JYP Entertainment, and SM Entertainment). BoA and J.Y. Park already started the audition process for overseas hopefuls, with BoA flying out to L.A. and J.Y. Park coming to New York City.

On this day, however, all three judges came together to oversee auditions as a trio. The first time the judges came on set, they couldn’t help but feel nostalgic over their own audition process. The three thought back to the first time they auditioned to be a star, and shared their personal experiences.

A staff member of the program remarked,  ”Judges Yang Hyun Suk, J.Y. Park, and BoA judged the contestants honestly and fairly; while they pointed out strengths, they weren’t afraid to criticize any shortcomings as well. There are a lot of highly qualified contestants so the competition is fierce, and we feel as though this will be the greatest survival audition to find the world’s best K-Pop star. We hope you will look forward to the season, which will kick off in December.”

END_OF_DOCUMENT_TOKEN_TO_BE_REPLACED 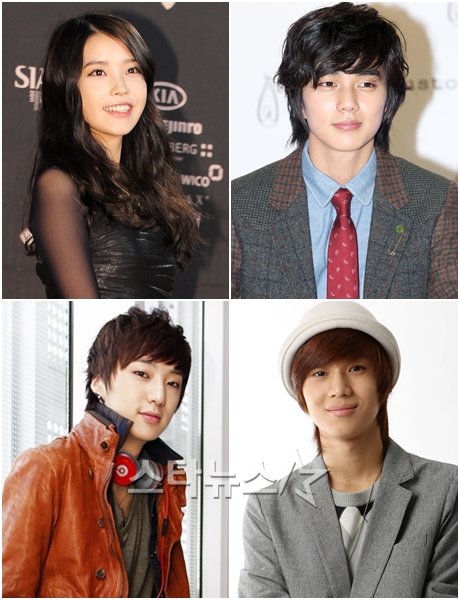 IU, Yoo Seung Ho, SHINee‘s Taemin, and Kang Seung Yoon have all confirmed that they won’t be attending college this year.

IU revealed earlier on that she didn’t plan on going to college for a while, so it’s no surprise that she won’t be taking the college entrance exam this year. Instead, she’s currently focusing on her comeback preparations.

Actor Yoo Seung Ho has also revealed that he won’t be taking the entrance exam in order to give his undivided attention to acting. His agency stated earlier that if Yoo Seung Ho finds an area that he wants to study, he will start the process of applying to colleges then.

SM Entertainment has announced that SHINee’s Taemin will not be taking the entrance exam as well. Due to his busy overseas schedule, Taemin was unable to prepare fully and therefore would not be submitting his application for the exam.