MBLAQ to release a Christmas single

MBLAQ is preparing to spread some Christmas cheer with their very first Christmas single!

On November 25th, a representative from J.Tune Camp revealed, “It’s the first time in three years since their debut that they will release a Christmas single. Initially, we wanted to release a new album at the end of this month, but due to their overseas activities, it has been pushed to early next year. With that being said, the members directly asked if they could record a Christmas carol”.

They continued, “MBLAQ wanted to share a gift with their fans, who have been waiting for their comeback. Their carol will be a playful song that will reflect the winter season with its warm and sweet lyrics”.

The song will be released in early December. 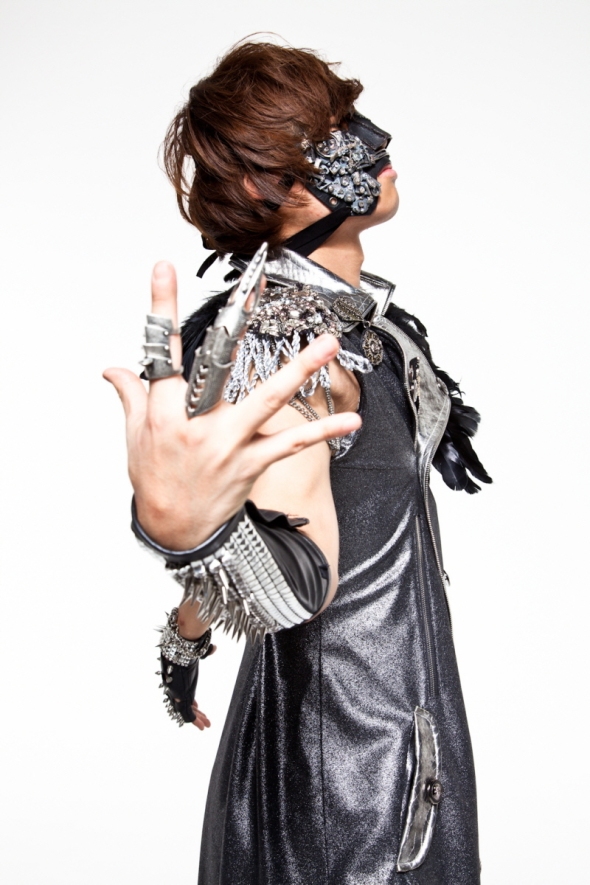 Big Bang’s Daesung will make his first public appearance at the press conference for upcoming MBN drama “What’s Up” on December 6. Since his car accident in May, Daesung has suspended all activities in Korea.

This will be the first official public event in Korea for Daesung since his car accident last May. He made an appearance at the MTV “European Music Awards” earlier this month with Big Bang, but that show took place in the UK.

“What’s Up” is a TV drama series featuring Daesung as the main lead character. The drama is about the live of theater major students. The 18-part series was filmed before Daesung’s car accident. Meanwhile, Daesung will make his first stage appearance at the “YG Family Concert” next month in Korea. Welcome back Daesung! 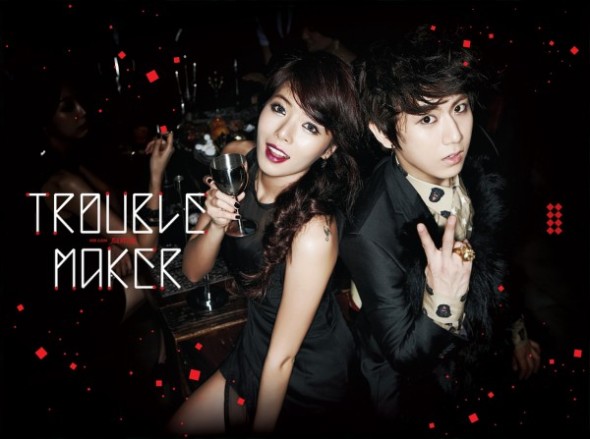 The agency unveiled the unit’s album jacket photo through their homepage, along with the announcement that Trouble Maker is comprised of B2ST‘s Hyunseung and 4minute‘s HyunA.

Their first mini albun, ‘Trouble Maker’,consists of a dance track as well as an emotional ballad.

END_OF_DOCUMENT_TOKEN_TO_BE_REPLACED

“The [BLUE STORM] in Indonesia concert, scheduled for November 26th, has been cancelled,” the company revealed through CN BLUE’s official website.

“This is a problem stemming from our lack of trust with the local Indonesian organizers of the event, thanks to shoddy event planning and failing to live up to their contract.”

“Although we tried to make several requests about the promotions and the concert, they never replied to our requests which aided our decision to cancel the event,” FNC Music said.

END_OF_DOCUMENT_TOKEN_TO_BE_REPLACED

Yesterday, Onew released his video trailer for SHINee‘s “Sons of the Sun“, a travel guide to Barcelona, Spain. Following up, fellow member Key has unveiled his teaser through SMTOWN‘s official YouTube!

The video contains clips of Key studying the city through his camera lens, taking notes of the street life around him, and enjoying himself thoroughly on this memorable project.

SHINee’s Onew, Key, and Taemin drafted a travel guide book that features members’ photos and stories from their time in the country as well as suggestions on where to eat in Barcelona. It’s targeted for readers who enjoy travelling, and for SHINee fans who would like to get a glimpse into the members’ experiences in Spain.

The book is scheduled to hit shelves on December 8th.

END_OF_DOCUMENT_TOKEN_TO_BE_REPLACED

Although he’s young (born in 1996), Zelo stands at 182 cm (~ 6 ft) tall and possesses a low voice. His specialty is rap, and he’s said to possess good looks that will definitely snatch hearts.

In the photo revealed today, Zelo covered half his face with a big mask, which allowed him to give the camera an enigmatic, if not intense look. There’s an aura of mystery surrounding Zelo, and expectations are rising high for his debut.

TS Entertainment stated, “Zelo is the youngest out of the members who are scheduled to debut, but he is a talented individual who possesses great potential, as he can rap in addition to performing acrobatics and dance. Zelo comes from ‘Zelos’, the god of rivalry in Greek mythology. He was named so because we saw how hard he tried amongst all the hyungs.”

END_OF_DOCUMENT_TOKEN_TO_BE_REPLACED

Although they have yet to debut, netizens are becoming increasingly interested in rookie boy group ‘Pledis Boys‘, and fan cafes for the boys are quickly emerging on the internet.

END_OF_DOCUMENT_TOKEN_TO_BE_REPLACED 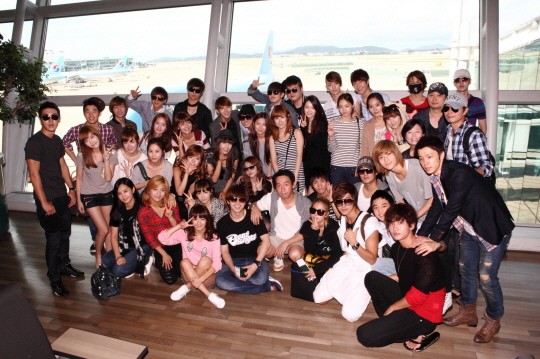 Fans of ‘Dream High‘ felt disappointed by the announcement made KBS today, who revealed that SM Entertainment has no plans to take part in the drama’s sequel.

Although the company had agreed to team up with KeyEast Entertainment and JYP Entertainment for ‘Dream High 2‘, they bowed out at the casting stage due to overwhelming overseas schedules for all of their artists, including Super Junior, SNSD, TVXQ, SHINee, and f(x).

“We focused on casting with the plan that SM Entertainment artists would take part in Season 2 based on Season 1′s success, but schedules were so tight that the plan eventually amounted to nothing,” said a representative for KBS. “It’s a shame, but there’s nothing we can do about it.”

‘Dream High 2′ is scheduled to air its first episode on January 30th, and has so far confirmed like 2AM‘s Jinwoon, SISTAR‘s Hyorin, actress Kang Sora, and rookie Ailee.

Check out a preview of 2NE1′s ‘Live Concert (Nolza)’ album

Back in August, 2NE1 brought the fire with their first solo concert, ‘Nolza‘, and now Blackjacks all over the world can relive the experience through the live concert album, ‘2NE1 1st Live Concert (Nolza)‘!

END_OF_DOCUMENT_TOKEN_TO_BE_REPLACED

With the value of music related stocks skyrocketing these days, SM is expected to go beyond the 1 trillion Won mark.

END_OF_DOCUMENT_TOKEN_TO_BE_REPLACED

Wheesung’s trainee, Ailee, to be a part of ‘Dream High 2′ 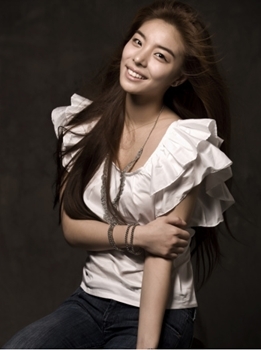 Wheesung‘s trainee and former YouTube star Ailee has been confirmed for ‘Dream High 2′.

A source revealed on November 23rd that Ailee will be appearing in the KBS drama, scheduled to air early next year.

The rookie singer made headlines in September when she appeared on the Chuseok special, ‘Singers and Trainees’. She impressed the judges as well as the viewers with her powerful vocals and stage manners, which made it hard to believe she hadn’t even debuted yet.

Ailee has been receiving love calls from various projects, but decided on ‘Dream High 2′. She will play the role of one of the members in a popular girl group trio along with SISTAR’s Hyorin.

END_OF_DOCUMENT_TOKEN_TO_BE_REPLACED

NBC‘s ‘Saturday Night Live‘ will be making a huge jump over the Pacific, as tvN has announced plans to create a spin-off of the famed show for the Korean audience.

Simply titled ‘Saturday Night Live Korea’, the comedy program will employ a similar format to its American brethen, with a weekly guest creating a show composed of several skits around his or her character.

This will be the first time that Korean broadcast networks will attempt a live comedy show. The SNLK crew will consist of 16 individuals talented in acting and comedy, including Lee Hae Young, Lee Han Wi, and many others.

“There are about 10 corners in SNL, and it will be broadcast live. Since it is a live production, everything from beginning to end must be scripted,” said Jang Jin, the director slated to helm the project. “Everything that might go wrong must be planned for as well. This is the most nervous I’ve felt waiting for a project to start.”

END_OF_DOCUMENT_TOKEN_TO_BE_REPLACED

T-ara members Jiyeon, Hyomin & Soyeon will be starring in the ‘Our Youth Roly Poly‘ musical along with Davichi‘s Kang Minkyung.

Even before production of the musical, producers knew they wanted to perform the musical on stages all across Asia. International fans’ expectations for ‘Our Youth Roly Poly’ are higher than ever as it is being put on by Hallyu stars T-ara and Davichi’s Kang Minkyung who has previously showcased her acting skills in a drama series.

The musical will tell the stories of seven older women, and their past experiences with love and friendship. T-ara and Kang Minkyung will be playing the roles of the women in their youth, but the characters who will play the roles of the older women have yet to be revealed. The staff remarked, “We assure you that the cast to play the middle-aged women will be just as glamourous as the girls who will play the younger roles“.

“In the musical, the cute and sassy schoolgirls grow up and turn into women of society. They become mothers, wives, and professional career women. We hope everyone will look forward to the cast members that will be fulfilling the latter roles“, they continued.

END_OF_DOCUMENT_TOKEN_TO_BE_REPLACED 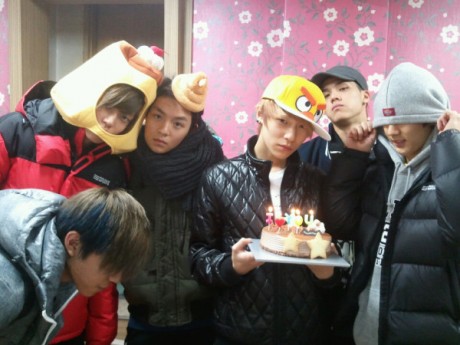 The TEEN TOP boys recently celebrated member L.Joe‘s birthday (November 23rd, 1993) and snapped a photo during the festivities to share with their fans. L.Joe recently wrote via TEEN TOP’s official Twitter page, “Thank you to all you Angels who wished me a Happy Birthday ♥ Today was a really good day ♥”

In the photo, the members were dressed warm in down jackets and scarves. They donned serious expressions to juxtapose their hilarious hats, and L.Joe wearing his own comical hat held his birthday cake for the photo.

Netizens responded to L.Joe’s tweet with comments such as, “Byunghun oppa is wearing the hat I gave him!”, and “Happy birthday honey!”