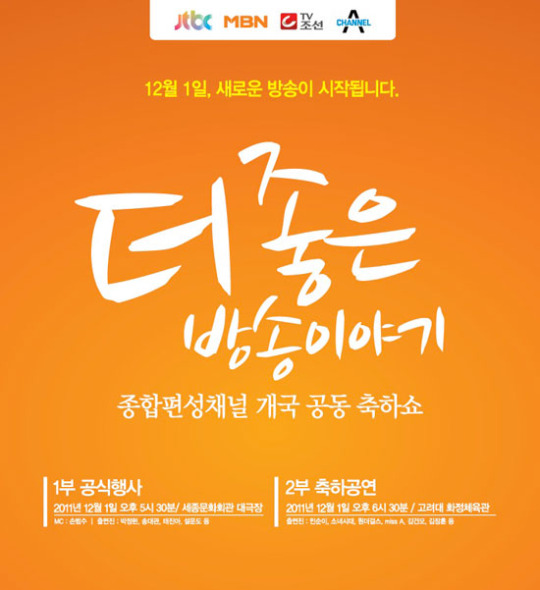 Early next month, cable TV will be launching a brand new channel called the “Joint Organization Channel“, which will premiere two brand new music channels for K-pop lovers to enjoy.

The program will broadcast a mini-concert of the top three K-pop songs.  The show will also provide information on K-pop songs placed 6th to 20th on the ‘K-Pop Board 100‘.

In addition, K-POPCON will reveal a weekly ‘Global Chart‘ which ranks popular K-pop songs from a global perspective based on the top viewed music videos on YouTube.  There will also be a ‘Global Pickup’ corner, that will reveal video footage of K-pop artists promoting overseas.

Sub-channel MBN will also broadcast a new music program called “Show! K-Music” every Saturday at 7 PM KST. This show is expected to have a similar format to the already existing music programs on public broadcasting stations. The sub-channel station managed to avoid any clashes with the live broadcasting of MBC‘s “Show! Music Core” by pre-recording the entire program beforehand and broadcasting their show three hours after MBC.

To commemorate its official launch, the ‘Joint Organization Channel”‘ will be holding a live launch show, “Better Broadcasting Stories“, on December 1st. Idol groups including Miss A, the Wonder Girls, SNSD, and SHINee will be special guest performers on the show.  Miss A and the Wonder Girls are scheduled to perform a special joint stage.

Are you looking forward to these two new K-pop shows?

This entry was posted on November 28, 2011 by bontheblog. It was filed under TV Show and was tagged with Channel A, Joint Organization Channel, JTBC, K-pop, MBN, TV Chosun.