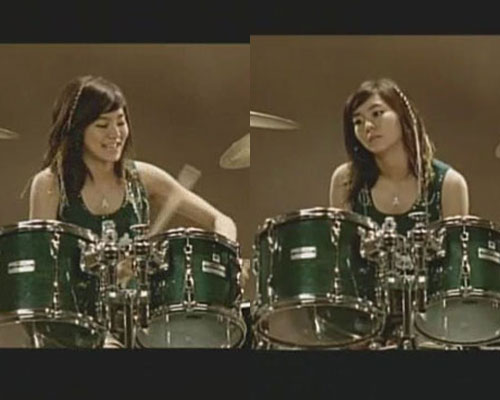 Past photos of After School‘s UEE have surfaced on the internet, gaining the attention of netizens.

On December 12th, the above photo was shared via an online community site with the title, “After School’s UEE, featured in Shinhwa‘s MV when she was just a trainee.”

The photo is a screenshot of UEE who was featured in Shinhwa’s “Once In A Lifetime” MV around 5 years ago. A much younger UEE is playing the drums, wearing a green sleeveless t-shirt.

UEE had some more meat on her bones and her image in the MV is quite different from her mature and charismatic stage persona today.

Netizens who saw the photos left comments such as, “She looks slightly more chubby but not that different“, “She is even more beautiful today“, and “She is a good actress, and I heard she has a pleasant personality as well“.

This entry was posted on December 14, 2011 by bontheblog. It was filed under Internet, Video and was tagged with After School, Shinhwa, Uee.