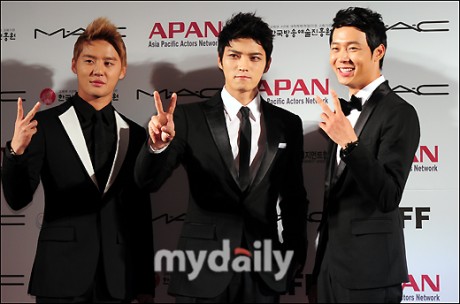 JYJ with 58,357 votes beat out Lee Seung Gi who had 53,560 votes to come out on top. JYJ who released their first special full-length Korean album ‘In Heaven‘ this year have proven that they are capable and talented musicians.

Behind JYJ were not only Lee Seung Gi, but also Park Si Hoo, Kim Hyun Joong, Girls’ Generation, and more.

Netizens favorite corner on ‘Gag Concert‘ proved to be ‘The Loving Man Who Makes Ambiguous Decisions’ which came in at #1, and actor Shin Ha Kyun of KBS 2TV‘s ‘Brain‘ seized the #1 spot for ‘Best Cast Role’.

This entry was posted on December 30, 2011 by bontheblog. It was filed under Internet and was tagged with Best Idol Star, JYJ, Lee Seung Gi.