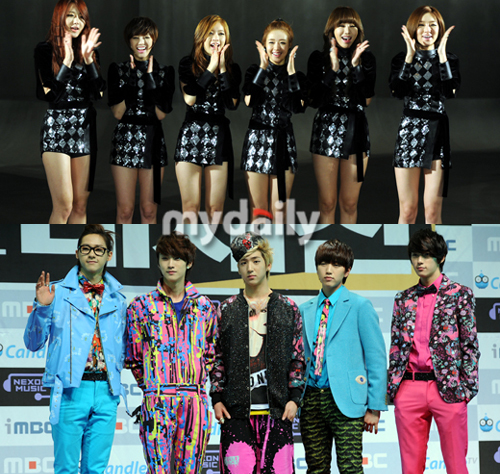 Despite the efforts of police officials who’ve stepped in to douse the heated fanwar between Dal Shabet‘s ‘Darlings’ and B1A4 ‘Banas’, the groups’ zealous fans have showed no signs of stopping. As such, the agencies of both artists have decided to release official statements to finally put the matter to rest once and for all.

In a joint statement, the companies expressed:

“When the controversy (with its subsequent scandals and rumors) erupted at the ‘Idol Star Athletics Championships’, the initial stance from both companies was to step back and wait for it to quiet down instead of stepping in and handling the matter ourselves.

Unfortunately, we were unable to stay quiet due to the false stories that were being spread, which is why we’re releasing an official statement now.

We feel that what has happened is very unfortunate, and we both hope that no further controversies will arise from this point on.

Following this notice, we ask that Banas and Darlings no longer create controversies and use this case as an opportunity to support each other and grow as fandoms.

As you all know, the fanclub is considered the image of the artist. It is not just a gathering. We hope that you’ll remember that in your heart as you read this. Instead of leaving wounds in the hearts of others, please lend your support and care for each other with love. We trust that this will help both groups and their fanclubs grow.

B1A4 and Dal Shabet both debuted in 2011 amidst much love. It was because of that love that they were able to grow this much. Please consider what has happened as a sort of ‘growing pain’ to becoming better artists and fanclubs that are loved by many.”

This entry was posted on January 12, 2012 by bontheblog. It was filed under News, Rumor and was tagged with B1A4, Dal Shabet, Happy Face Entertainment, WM Entertainment.