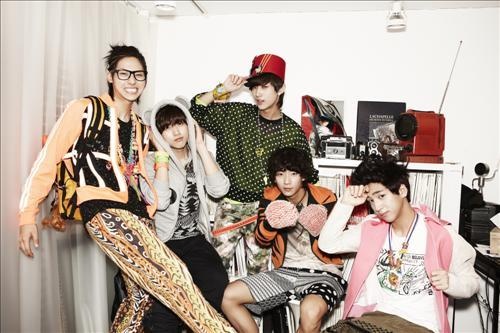 The boys are currently starring in Mnet’s ‘Sesame Player 3’, where for 12 weeks, they’ll embark on various missions to increase their Twitter followers.

The goal is actually part of a contract B1A4 made with ‘Sesame Player 3′. According to this contract, “B1A4 will not hide things about their personal lives on the show”, “B1A4 will work hard in making impersonations and utilizing other talents to bring laughter to their fans”, and “Absence without leave and refusal to film will not be acceptable.”

Fans are excited and looking forward to this challenge due to some of the members’ promises. B1A4’s Gongchan promised that he would take off his top if they reach 1,500,000 followers, while Baro said he would reveal his six pack if they hit 2,000,000.

This entry was posted on February 4, 2012 by bontheblog. It was filed under Twitter and was tagged with B1A4.