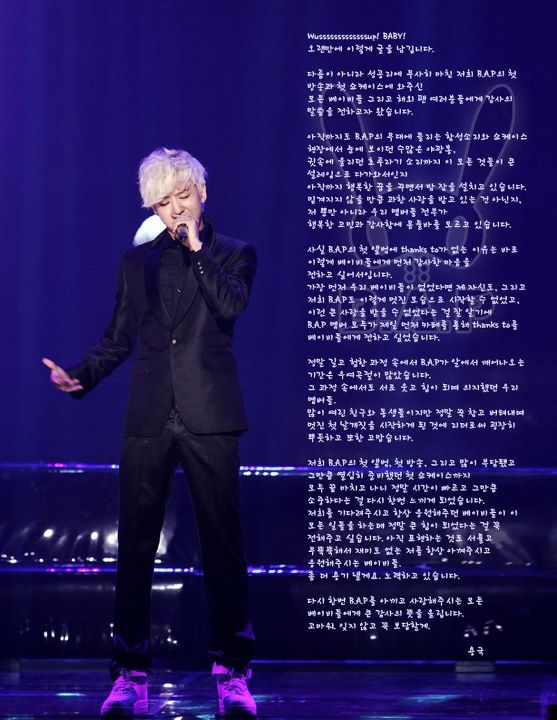 With their successful debut, B.A.P sent their appreciation messages, ‘Special Thanks To’, for their fans’ support through their official Facebook.

Fans are cheering the rookie group on after they debuted on February 6th, released their album, ‘Warrior’, and held a showcase. To repay back their fans’ support, each member left a sincere and emotional message.

The messages not only included the members’ personal thoughts, but also photos from their showcase on January 28th.

In addition, Bang Yong Guk, who is known for his blunt style, showed off a more tender side, calling his fans with the nickname, ‘baby’.

END_OF_DOCUMENT_TOKEN_TO_BE_REPLACED 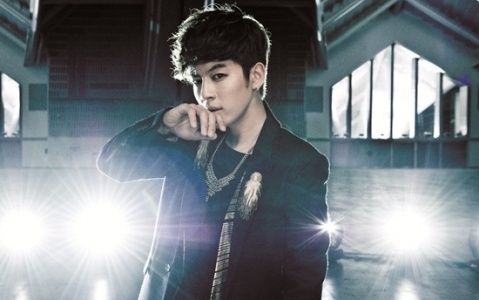 “JYP is just as hard to please.”

Q1. How did you come to work with JYP?

A: I really liked it (the song)

Since long ago, (Park) Jin Young hyung and I am very close, so as a joke we always said, “lets work together.” A while ago, I had a chance to see him again with Yang (Hyun Suk) CEO and (Park Jin Young) played this song for us to listen. After hearing that it has been made a year ago, I thought, “I really like it and want to sing this song.” After choosing the title song, I started working on my album.

END_OF_DOCUMENT_TOKEN_TO_BE_REPLACED 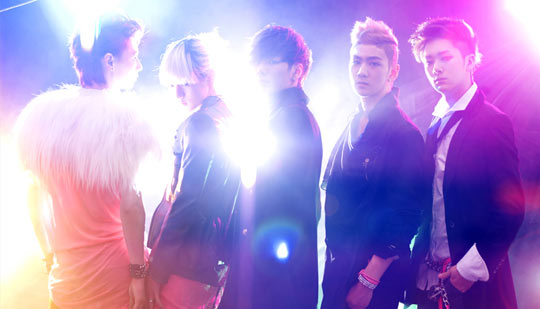 As we reported earlier, rookie boy group NU’EST is planning a Valentine’s date with their fans!

Although they have yet to make their official debut, Pledis Entertainment‘s first boy group has been receiving much love and interest after they revealed their official name and profile pictures.

The boys want to return that love by setting up a special date with their fans for the very first time, and they personally explained how fans can participate in the special event.

Check out the video and translations below, and make sure to sign up for the event by visiting their Facebook page!

END_OF_DOCUMENT_TOKEN_TO_BE_REPLACED 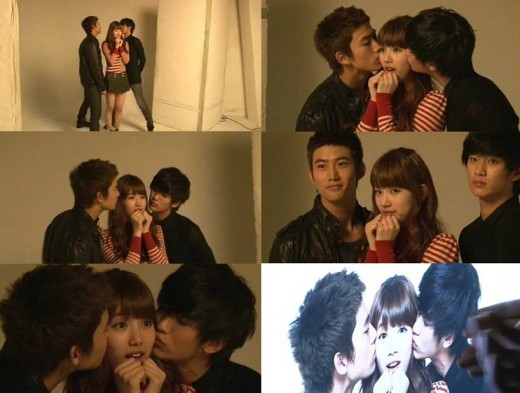 The above photos as well as a video were shared on an online community site with the the title, ‘Kim Soohyun & Ok Taecyeon giving Suzy kisses‘.

END_OF_DOCUMENT_TOKEN_TO_BE_REPLACED 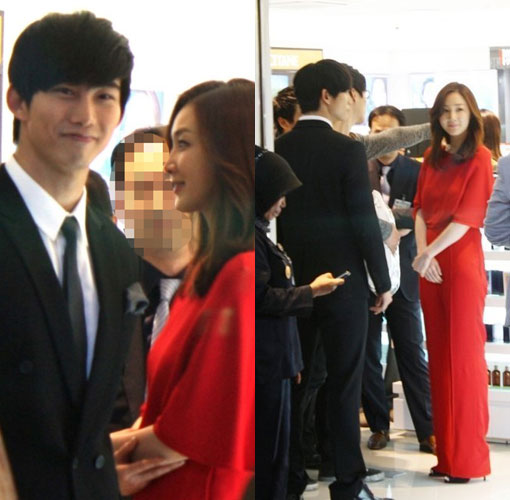 Hallyu actress Choi Ji Woo and 2PM‘s Taecyeon were seen together in Indonesia.

On February 6th, the above photo was posted on an online community board with the title, “Taecyeon and Choi Ji Woo, strangely they look good together“.

The two were in Indonesia as ambassadors for the grand opening of a Lotte Duty Free Shop at the Soekarno-Hatta airport.

The contrast between Ji Woo’s bright red dress and Taecyeon’s black suit accentuated the beauty of the two as they looked like a couple. With both their tall height and slender frames, the two stars looked like mannequins posing in front of the store.

END_OF_DOCUMENT_TOKEN_TO_BE_REPLACED 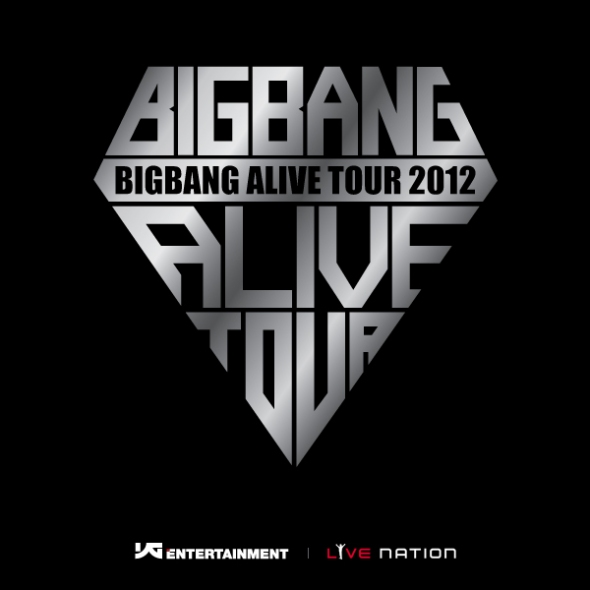 Fans will finally have their wishes come true, as the 5-member boy band will make various stops at different cities.

From March 2nd to the 4th, Big Bang will open their world tour in the Seoul Olympic Park Gymnastic Stadium. Following these shows, the group will tour 16 countries, 25 cities, in Asia, North America, South America, and Europe.

By working with Live Nation, the tour will be brought to a higher level in terms of the scale of directing. As Live Nation has helped world tours for Madonna and U2, Big Bang is the first Asian group/singers to earn the help of Live Nation with the joint investment and production team. Live Nation is recently a promotion agent for K-pop singers in 1-2 regions in America and Europe.

END_OF_DOCUMENT_TOKEN_TO_BE_REPLACED 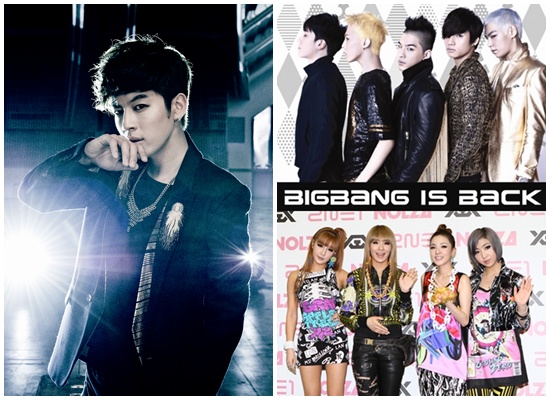 Se7en is proud of the groups which can represent the Republic of Korea, Big Bang and 2NE1. He also regards them as his motivation and in this interview, his special affection towards these groups is shown.

Enews has recently conducted an interview with Se7en, he said, “the development of Big Bang and 2NE1 is good, they are the groups that I like very much. I am really proud of these friends.” As one of the representative singers of YG Entertainment, Se7en is a witness of the growth of his juniors, Big Bang and 2NE1.

He continued, “In fact, I am glad that Big Bang and 2NE1 are my juniors and I like them. I always bear them in mind. If my favorite brothers and sisters come back but something bad happens to them, I will be very sad. I hope more good things can happen to them. Now, these friends have climbed to the top spots of the showbiz. Thanks for this, I always prepare myself well because I need to work harder in order to show that I am a great brother to them.”

He concluded, “It can be said that I failed in doing my activities in America; however, it was also an opportunity for me to learn how to be self-independent and responsible. I have become more matured during this period of time so now, I am a little bit more proud when being with my juniors. For Big Bang and 2NE1, it seems that I am their hyung.”

END_OF_DOCUMENT_TOKEN_TO_BE_REPLACED

All the Big Bang Members Transformations Just as Shocking as T.O.P’s! 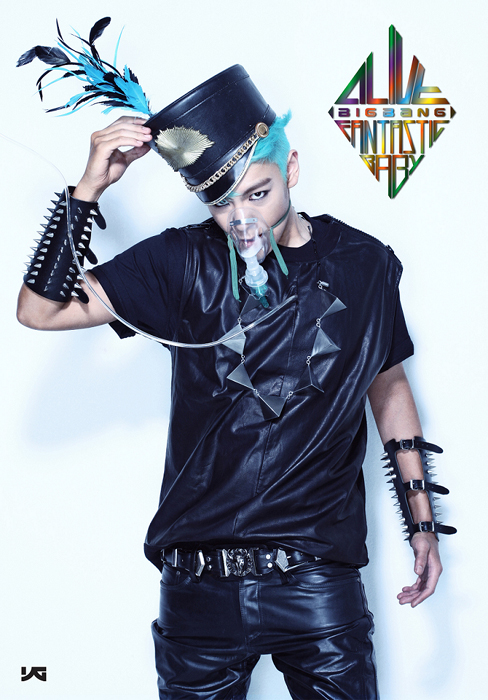 With their comeback nearing on the 29th, Big Bang TOP’s teaser photo was released. It revealed the shocking new transformation and concept, leaving it up to netizens to foreshadow that the rest of the members’ hairstyles will be just as big of a transformation.

On the 6th, TOP revealed a photo of himself on the YG Entertainment blog where it showed his bright sky-blue hair and intense masculine beauty. As this photo first reached out to the online public, many fans began posting on their personal online blogs and/or SNS accounts saying, “TOP’s eyes and hair are so overwhelming and powerful” and “First the silver hair and now the blue hair, he can pull it off perfectly”.

But apparently, YG says this is only the beginning. During a phone call on the 6th with OSEN News, they garnered much more anticipation when they stated that, “The other members have most definitely taken the risk to transform into something just as shocking as TOP has. They have especially put forth a lot of effort in their hair to better surprise their fans.”

In addition, they have also added that, “A diverse spectrum of fashion for each member will also be seen throughout this new album,” and “Not only have we stressed on showing off the masculinity like we did with TOP, but we have also been planning many different concepts to reveal as well.”