Even before their explosive WARRIOR debut, B.A.P has been gaining a lot of popularity! With such popularity comes fans, and fans of course deserve a cool fan name! Now, it seems that B.A.P fans will no longer be nameless, as B.A.P and TS Entertainment seem to have come to a decision on what to call the fan club!

END_OF_DOCUMENT_TOKEN_TO_BE_REPLACED

Dalmatian to make a comeback around March

It was unveiled earlier this week, that six-member group Dalmatian will finally be making a comeback sometime this March.

The news was revealed after Rudeboy, a popular rapper and producer, tweeted that the group was recording and getting ready for promotions. Rudeboy has also worked with other popular artists and groups such as MBLAQ, Miryo and NS YoonG (NS Yoonji).

Dalmatian, signed under MC Mong‘s Monkey Funch Entertainment, have gained quite some attention ever since their “The Man Opposed” promotions back in April of last year. However, they will come back in March as a 5-member group, due to Dari’s military duties.

Rudeboy has also confirmed that he’s currently working on B1A4‘s new song. The group is also due to come back around March.

END_OF_DOCUMENT_TOKEN_TO_BE_REPLACED

B.A.P opens up about their mission and what sets them apart

“We have come to conquer Earth!”

It’s a strange phrase to be sure, as it’s mostly heard in sci-fi movies from evil villains or aliens from outer space. But being extraordinary is something that rookie group B.A.P (‘Best Absolute Perfect’) is determined to become, and so the phrase has turned into their personal mission statement.

The interview began with the reporter’s observation that the rookie group’s start has been as bold as their ambition. So far, B.A.P managed to draw 3,000 fans to their debut showcase and ranked in the top 10 on Billboard‘s ‘World Album Chart’ — all indicating that their debut has not been like that of a typical idol group.

END_OF_DOCUMENT_TOKEN_TO_BE_REPLACED 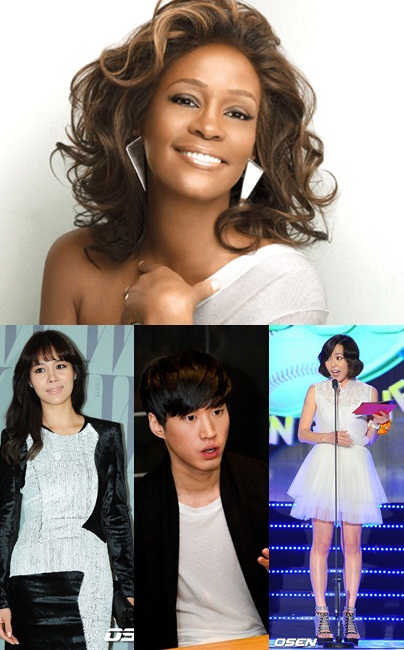 Many of you have probably heard the news of Whitney Houston‘s untimely death by now; news of the legendary pop singer who left this world at the age of 48 spread all over the world in minutes upon it’s release.  People all over the world are grieving over her death including a number of K-pop celebrities.

On February 12th, former lead singer of Fin.K.L, Ock Ju Hyun tweeted, “My heart aches after hearing the loss of Whitney Houston.  She was the first singer that I loved and respected so much.  She had a powerful and heavenly voice.  Rest in Peace.”

Lee Young Hyun of Big Mama was also devastated by the news and wrote, “Whitney Houston has died?  That’s impossible…no way..  Whitney Houston is a musician who influenced me so much.  She was a role model and an imaginary mentor to me.”

END_OF_DOCUMENT_TOKEN_TO_BE_REPLACED

G-Dragon & Daesung, “We want to apologize before asking for forgiveness”

Previously, we reported that Big Bang members G-Dragon and Daesung would be appearing on SBS ‘Healing Camp‘. We have received further information about the recording.

According to reports, the show will take place at YG headquarters in Seoul. G-Dragon and Daesung will once again be apologizing to viewers and fans through the show for their previous controversies, which includes a fatal car accident and marijuana usage. Their first formal apology occurred back in December of last year during the ‘15th Anniversary YG Family Concert‘.

An insider from the show revealed that the two members had a long talk with hosts Lee Kyung Kyu, Kim Jae Dong, and Han Hye Jin as they reflected back on the hardships they suffered in 2011. The two idols firmly stated, “We want to apologize before asking for forgiveness.”

Fortunately, the mood of the set wasn’t all dark and sad. Fellow members Taeyang, T.O.P, and Seungri also made appearances during the middle of the show and really brightened the atmosphere with fun talks.

END_OF_DOCUMENT_TOKEN_TO_BE_REPLACED

“KPOP STAR” Taeyang + Gong Minji give one-day lessons… “I used to be bad at singing, too”

Big Bang’s Taeyang and 2NE1’s Gong Minji are coming out as vocal trainers for a one-day lesson.

On the episode airing this coming 11th on SBS ‘Survival Audition – KPOP Star’ (also known as “KPOP Star”), Taeyang and Gong Minji are expected to make an appearance for one day as vocal trainers for YG Entertainment training.

With the two of them suddenly coming into the picture, it it said that the mood of the filming site rose with heat. The two will be training each contestant with a ‘1-on-1 one-point lesson’ strategy, unlike the first round of training they had before.

END_OF_DOCUMENT_TOKEN_TO_BE_REPLACED

All Big Bang members to appear on Healing Camp

Although the main guests are Daesung and G-Dragon, all the rest of the Bigbang members came to the ‘Healing Camp’ set to support the two. Significantly, all five members of Bigbang do not commonly appear together on shows. Last May all five members did appear in ‘Muhandojun‘ (Infinite Challenge), but it has been a while since they have made an appearance on a talk show.

Producer Baek stated, “All the members came to support each other and went to a pork rind BBQ restaurant they went often in their early debut days to have a sincere and deep conversation. The members said that they learned more about each other”.

The shooting for ‘Healing Camp’ was at YG Entertainment. ‘Healing Camp’ aims to find the best set for the guests. Hence, ‘Healing Camp’ chose the YG building in order to protect Daesung and also because Daesung confessed something.