Jay Park talks about his new album in recent interview

Singer Jay Park who has made a successful comeback as a solo artist has returned to the K-pop scene as a ‘musician’. The singer who returned with his first full-length album after a year-long hiatus has produced all but two songs on his new record. He is a musician who definitely dances to the beat of his own drum, and knows what works for him.

His new album ‘NEW BREED‘ dropped on February 7th, and it is full of R&B and Pop, two genres of music that resonates with him, but is more unfamiliar to his fans.

“I think that eventually, I will be able to properly convey the kind of music that I enjoy with my fans,” he said.

Instead of following the current trends, Jay Park is stubborn about releasing music that he enjoys and is passionate about, and therefore he is able to work with more joy and freedom. It seems to be his secret to remaining at the top of the game, when trends tend to change so quickly in this industry.

When OSEN recently met with Jay for an interview at a small cafe in Apgujeong, he seemed really excited about the release of his new record.

“My first full-length album is out,” he said. “We wanted to release it sooner after we finished production last September, but we pushed it back after I got cast in a movie and started doing more variety shows. But I’m still excited. I put in a lot of hard work for the last year. I wrote maybe 30 songs in total, but I hand-picked 15 for this one. Because I wrote music that I enjoy, inevitably there are a wide variety of genres on the album. Maybe I was a bit ignorant, making the album without a specific concept or direction, but I think an album that delivers variety is a good one.”

Jay who released his first ever full-length album could not stop grinning ear to ear. When asked if he was satisfied with his newest project, he responded that he was maybe 85% satisfied. The 15% reflected the part of the album that was not written by Jay himself. But Jay received that part of the album from producer Rob Knox who worked with major artists such as Justin Timberlake, Rihanna, Britney Spears, and more.

“It was a lot of fun working with Rob Knox,” Jay said. “He told me he was a huge fan of mine, and offered to write songs for free. It was a huge honor for me. I know he doesn’t work with just anyone, haha. I was so glad that he liked my style of music. We worked lightning fast, and we finished his song in a single day.”

Considering that 13 of 15 songs on the album were written by Jay himself, he more than deserves the title of ‘musician’. His rather suggestive lyrics which reflect his carefree and youthful nature also drew attention from fans, at times sparking controversy.

“I’m so honored to be labeled a ‘musician’, but it’s a lot to live up to. I write music because I think it’s fun,” he said. “I think that title can cause me to become stressed out, because as a ‘musician’, people expect you to release something amazing. But at the same time, I take a lot of pride in my music. I freely wrote the lyrics and they came out somewhat suggestive, but I don’t really care (laughs).”

Different from the overflow of catchy ‘hook’ songs in the K-pop scene, Jay’s style of music stays true to authentic pop ballads. Though it may be a genre a bit more unfamiliar with the fans, he has no regrets about this album, as he produced the kind of music that he wanted to create.

“When I make a mini-album, I definitely take the public into consideration. But this is my first full-length album, and I just felt like I needed to have fun while producing the music. I did think about the fans a lot when I made my title song, but with the rest of the songs, I did whatever my heart desired. These days it’s really important have an overall concept, the right stage ensembles and choreography to go with the song, but people aren’t always watching performances, so I made sure I delivered the same feelings through the actual song as well.”

So what are his goals for this first album?

“My goal is to reach out to the masses with my music,” he said. “I want them to know that my music reflects my unique colors and offers variety. I also want to release a new album in English. It’s all been in Korean so far. Not necessarily because I want to enter the American market, but because I also want to make good music in English.” 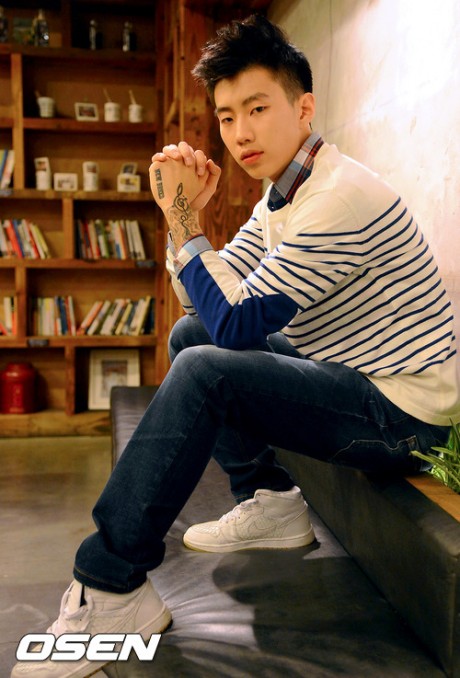 OSEN asked Jay about his plans for this year. Though he is extremely busy producing his new album, he seemed more determined to do more this year than ever.

“First, I want to focus on sharpening my vocals and my dance moves, now that my first full-length album is out,” he said. “I also started filming KBS 2TV‘s ‘Immortal Song 2‘, and I think it will serve as a chance for me to showcase another side of me that’s different from the Jay Park on an independent stage. I will do my best. I also have plans for an independent concert next month. It will probably be a 19+ show. I just plan on working hard at everything I do, no matter what it is.”

This entry was posted on February 15, 2012 by bontheblog. It was filed under Interviews and was tagged with Jay Park.