A spokesperson stated, “G-Dragon’s collaboration with Ludacris was finished at the end of last year. This work will most likely be in G-Dragon’s new solo album that is planned to come out this summer and Ludacris will participate in the album by featuring in one of GD’s songs. We hope many look forward to the results, as G-Dragon has worked with world-wide musicians“.
END_OF_DOCUMENT_TOKEN_TO_BE_REPLACED

YG Entertainment was in the spotlight for being selective against certain TV shows or channels. It was revealed that YG artists were focusing on appearances on SBS channel only.

Regarding the criticism YG Entertainment has received, Yang Hyun Suk stated, “If stars schedule appearances as much as they are requested, they might be scheduled for way too many appearances. Not only do the stars get exhausted but their back dancers, stylist, manager and all the staff become exhausted. And it’s not like they can appear on each event looking the same way. They have to look unique and different for each appearance. Sometimes when stars appear on too many shows, they begin to look the same in each appearance, which is a problem.”

And “Instead of scheduling as many events possible, we decided to choose and focus on the shows that the artist will be appearing in. We’re trying to schedule about two appearances per week for the stars. For the stars to perform in their best condition, they need to maintain their strength but if they get overwhelmed, they won’t be able to show perfect performances. Even if I get criticized, it just has to be done this way for the artists.”

Even though Yang Hyun Suk is being criticized for being selective against certain shows, he explains that it is for the best. He will not overwhelm and exhaust the stars by over scheduling them. Instead, Yang Hyun Suk wants his stars to perform at their 100% to show their fans a perfect performance.

END_OF_DOCUMENT_TOKEN_TO_BE_REPLACED

NU’EST is pressured by their title as the Male version of After School?

It’s the idol generation. There are so many idols currently on the scene and many more planning to dive in. Amongst them, there are five boys who stand out. They are the New Established Style Tempo or NU’EST.

A representative from TVDaily met the five members of NU’EST whose smiles made the chilly day immediately warmer. The leader, JR, Minhyun, Baekho, Len, and Aaron‘s eyes were bright and filled with passion.

NU’EST is getting noticed for their talented musical skills and stunning visuals even before their official debut. Their first song, “Face” relays a message of being the spokesperson for the teens.

“In “Face” we incorporated dubstep which is very popular in Europe these days. It’s a combination of our message and trendy music. Although it’s our debut song, we’ve put in a lot of our own opinions into this single. It’s especially meaningful because Aaron and JR wrote the lyrics to the album’s intro song. It will be different from other songs.”

END_OF_DOCUMENT_TOKEN_TO_BE_REPLACED

LEDApple’s rise in popularity is due to the help of composer Cho Young Soo? 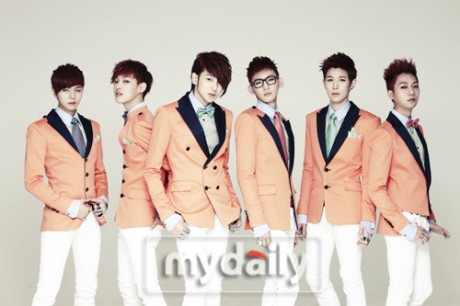