SM, YG and JYP Entertainment, as publicly traded stock companies on Korea’s KOSDAQ, all recently submitted its 2011 audit report to the Financial Supervisory Service, providing the public with a glimpse inside the financial turnings of the three major entertainment agencies.

First, it was revealed that the combined income of the three major agencies for 2011 was a staggering 182 billion won (approximately 160 million U.S. dollars), an all-time record for the agencies.

END_OF_DOCUMENT_TOKEN_TO_BE_REPLACED 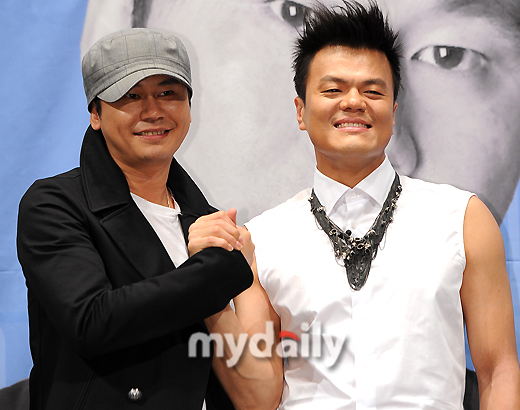 Yang Hyunsuk told Star News that “Park Jinyoung asked me who made “Bad Boy” because he thinks its the best song from the past year. I was happy to hear this from such an influential producer.”

He went on to say “I also personally like “Bad Boy” out of all the Big Bang songs, and I think Park Jinyoung likes this song because he has an interest in Hip Hop and R&B.”

Park Jinyoung’s praise to Big Bang was very heart-warming, considering Big Bang is an idol group from a rival company.

END_OF_DOCUMENT_TOKEN_TO_BE_REPLACED

Popular idols Big Bang and 2NE1 are said to take over Japan at the same time.
Both groups will start promotions with new Japanese albums on the 28th. Big Bang with “Alive” and 2NE1 with their first full album, “Collection.”

Big Bang’s “Alive” will have two new songs “Ego,” and “Feeling,” along with the songs from the 5th mini album, for a total of 10 songs.

“Feeling” became the theme song for Japanese animation “Transformer Prime,” and it was made by worldwide artist Boyz Noize, G-Dragon, and TOP.

2NE1’s first Japanese album will have Japanese versions of their hit songs from Korea, plus a bonus track of “Like a Virgin.”