Popdust’s “The Great Boy Band Hair-Off: We Have A Winner” 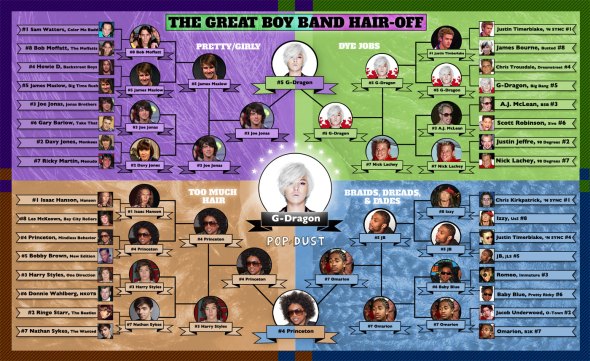 Over the last week we revisited the good, the bad and the ugliest of boy band hairstyles throughout pop music history. Our look back at everything from Davy Jones and Ringo Starr’s trailblazing swoops to the fluctuating styles of Justin Timberlake during his ‘N Sync days left us with 32 of the all-time greatest boy band haircuts, and a healthy debate over what is considered today’s definitive heartthrob look, according to you, the fans. Now that March Madness is over, the time has come to crown a winner. Drumroll, please…

The heated final between G-Dragon of Big Bang and Princeton of Mindless Behavior saw over 16,000 votes before declaring the K-pop sensation the official champion of our first-ever bracket-style voting game. Emerging out of the highly competitive Dye Jobs region, the number five seed overcame significant odds to defeat heavyweights from premier boy band acts of the late ’90s, like 98 Degrees, Backstreet Boys and ‘N Sync. An achievement in itself, yet the band’s colorful frontman should take comfort knowing his tendency to both quickly and frequently change his hue gives him an advantage in any future hair-related competitions, and drives his millions of supporters wild. A big congratulations to G-Dragon and Big Bang, as well as the dedicated fans of K-pop, unique hairstyles and online bracket games everywhere. Until next year!

This entry was posted on April 5, 2012 by bontheblog. It was filed under News and was tagged with Big Bang, G-Dragon, Popdust, Yg Entertainment.