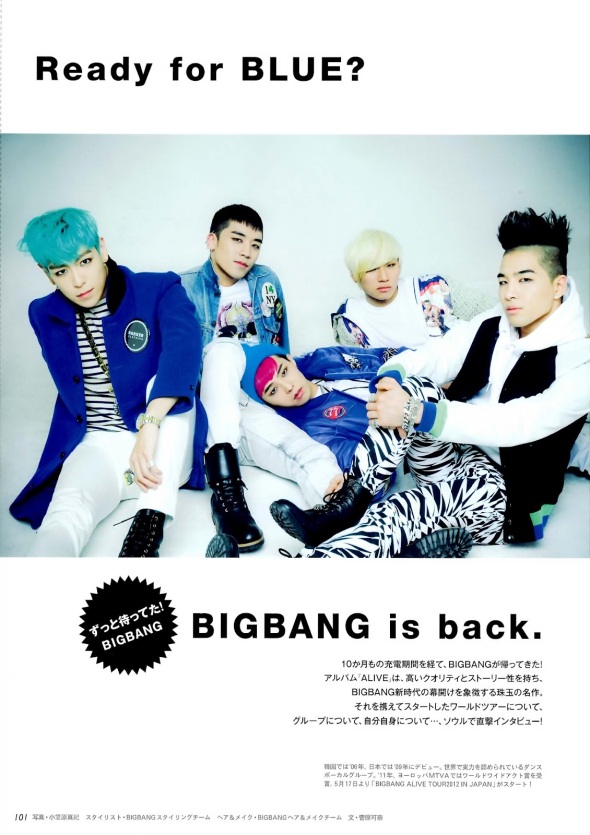 T.O.P:
I will only act in romance drama after I know more about love.For now, I’m still lacking in experience.
TOP made a comeback with a shocking mint green hairstyle. What’s your thought for the ‘ALIVE’ album?

“When I wrote the rap lyrics, I was trying my best to do it with honesty and choosing beautiful words. For the Japanese version, I also use gentle words to make sure all listeners regardless of their ages can understand well. For me, this album is the most high quality compared to the other albums. This mint color hair style was decided upon an instinct while producing the album. I confident this hairstyle will match the album concept very well. Changing to this hairstyle, I felt that my characteristic has become more gentle. ”

END_OF_DOCUMENT_TOKEN_TO_BE_REPLACED 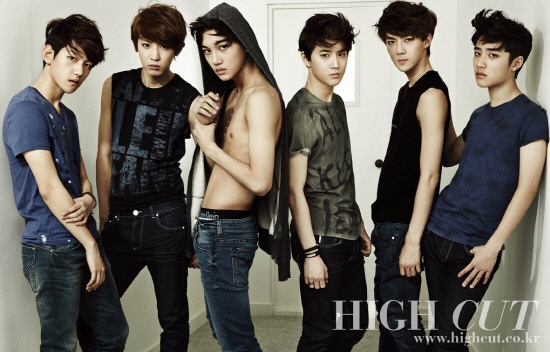 SM Entertainment’s fresh faces, EXO-K, recently graced the cover of ‘High Cut’, a fashion publication that has some of K-Pop’s most iconic stars under its belt. Amidst the magazine’s glossy pages featuring the six up-and coming-idols, the EXO-K boys sat down for a brief interview, spilling their pre-debut stories, dorm room antics and future goals. While the boys seemed timid and shy by the unfamiliar atmosphere of an interview, High Cut’s first encounter with these young idols proved to be a down-to-earth and a heartwarming one.

– Because EXO is SM Entertainment’s newest project since 2009, there is obviously a lot of expectations for the group. Any last words before the big debut? –

Suho: All 12 of us have been working diligently to deliver the best music and performances, not just in Asia, but for the whole world. We will try our best to continue our strong work ethics for EXO-K and EXO-M to become an established group.

– What are some of your most memorable moments as a trainee? –

END_OF_DOCUMENT_TOKEN_TO_BE_REPLACED

T.O.P, “If the image of a ‘star’ becomes a hindrance to my acting, then I will throw that image away any time” 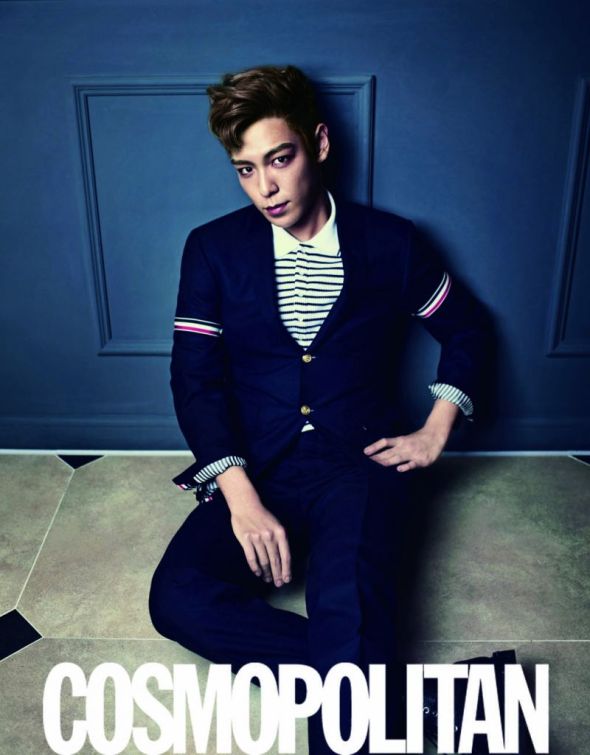 Big Bang T.O.P, “If the image of a ‘star’ becomes a hindrance to my acting, then I will throw that image away any time.”

Big Bang’s TOP recently showed an interest and attachment to the subject of “acting”.

Being able to freely manage the life of a musician and actor, TOP decked out the front cover of a special edition March issue of Cosmo Men Magazine. As TOP showed off the image of a very playful gentleman in his New York style suits, he also gave off the vibe of a very masculine charisma that not many other idol members can pull off.

During an interview(with Cosmo Men), TOP said that he would throw away the image of a “star” any day if it was to get in the way of him becoming an actor, hence stating that he would never want to take on the roles of a popular singer, a bad boy, or a wealthy family’s son since those are the only characters that tend to garner the most popularity. He stated that he wants to take on a role that suits him well, not just a role where he can gain popularity from it.

When the interviewer confessed that he would do well in any role, he stated, “I had times when I thought that being a celebrity didn’t fit me at all,” but confessed that, “Even though I was not born to be a celebrity, I have studied about it a lot and have many things learned. I am still continuing to learn to become the best.”

END_OF_DOCUMENT_TOKEN_TO_BE_REPLACED 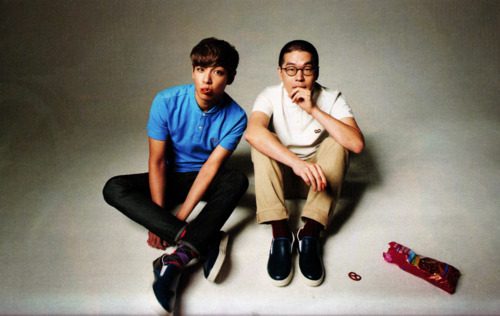 (Joint interview between Soh CD & TOP)
Not long ago, TOP made a surprise appearance at Gummy’s ‘I am a Singer’ stage. How was it like being on the show?
I was on the show because I heard that Gummy noona didn’t get number 1 in the previous competition, so I had a “I must make her number 1” thought. In the end, she got a really good score (number 1) so I felt satisfied. Actually if ‘I’ am a Singer’ was my own stage, I would be very nervous but since I was there only to help so I told myself not to worry. After I finished the stage for ‘Rascal’, I really did end up becoming one.
Lee Mi-Suk sunbae-nim said on ‘Healing Camp’ that she would like to act with you. When will you make your comeback as an actor again?
It’s not like that, but the after I finished recording for ‘I am A Singer’, I randomly saw Lee Mi-Suk sunbae-nim on ‘Healing Camp’. As a matter of fact, I said on a variety show before that “it’s tiring having photoshoots with Lee Mi-Suk sunbae-nim” as a way to be funny, but it became too exaggerated and I regretted saying that. It will definitely be an honor to act with Lee Mi-Suk sunbae-nim. As for my acting, I have a few projects on hand but because BIGBANG’s album release has been pushed to an earlier date, so my entire focus is on the album right now. If there are any other good projects and if our timing is the same, then I definitely want to act together no matter what.
Do you have any intention of releasing a solo album?
There’s nothing much to say about my solo album. I will release it when I think I’m ready. To be honest, I have already created lots of songs but I think I should work on them a bit more. I’m working on my confidence too and it’s slowly increasing. If I can’t produce an album that will make people surprised, then I don’t think there’s a need to produce one. First of all, I want to worry less starting from January, 2012 (laughs).
END_OF_DOCUMENT_TOKEN_TO_BE_REPLACED

T.O.P, “We have many surprising news that we can’t reveal yet” 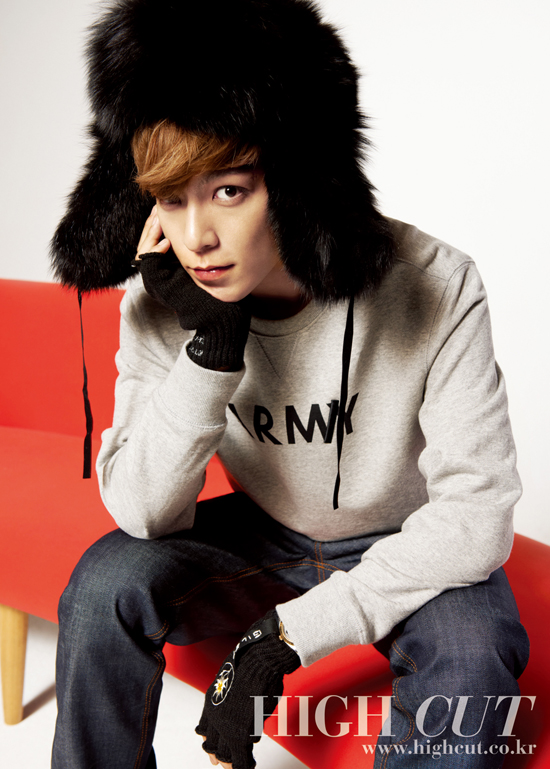 With their comeback right ahead of them, TOP slightly mentioned Big Bang’s future moves and what they have in store for us within this next year.

END_OF_DOCUMENT_TOKEN_TO_BE_REPLACED 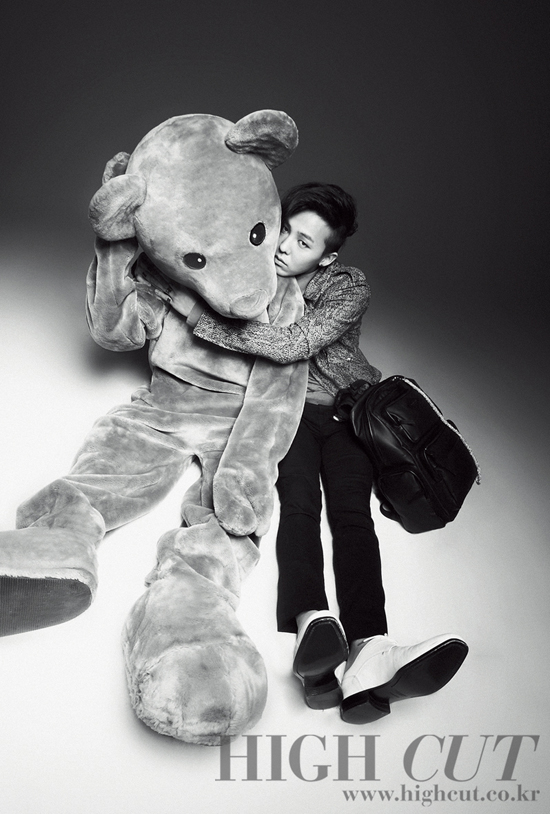 After 4 months of no activities, GD conducted an interview with High Cut. Although it was an interview that lasted for about 20 minutes only, when asked skeptical questions, he still answered them positively. His describes this “blank” period as “having deep contemplation” and “having a good time”. And during this period, GD is growing up fast.

Q1: It has been a while. What are you busy with these days?
GD: I’ve been busy preparing for the new album so I don’t have time for other things. I spend most of my time in the studio and seldom go out.

Q2: I see that you have new tattoos on your fingers. Did you get them during your rest period?
GD: No, these are actually not real tattoos. I just got them yesterday to prepare for the cover of the new album. In fact, I’m not sure whether I’ll get real tattoos again in the future. I want to, but people asked me not, so I just got these.

Q3: Because of everything that happened, you suddenly had a “blank” period. Did you use this time for self-reflection?
GD: I haven’t had a rest ever since I debuted. Although it isn’t my original intention, I was able to look back during this rest period. I know it doesn’t sound nice that I was only able to reflect because something bad happened. However, if you look at it from another perspective, it was a really meaningful period for me since I had a lot of time to reflect on myself. It was just like having some good time with myself.

END_OF_DOCUMENT_TOKEN_TO_BE_REPLACED

G-Dragon opens up about past controversies in High Cut 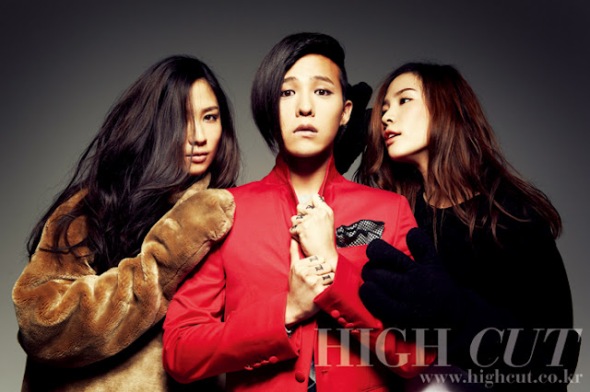 Big Bang member G-Dragon showed off many facets to his facial expressions for the recent photo shoot for ‘High Cut’. Whether he is looking lovable holding a huge teddy bear or holds a dragon above his head for the year of the dragon, or is surrounded by sexy female models looking taken aback, G-Dragon’s presence shined through.

G-Dragon proved why he is referred to as a fashion icon utilizing various accessories in stylish ways.

At the set, Big Bang member Taeyang and Daesung made surprise appearances and said, “Please take good care of our Ji Yong.”

During the interview that followed the photo shoot, G-Dragon commented regarding Big Bang’s activities in 2012, “I think we need to work harder than ever with the feeling of repaying grace.”

END_OF_DOCUMENT_TOKEN_TO_BE_REPLACED

There have been many beautiful faces gracing the cover of 1st Look Magazine in 2011, but the ‘Cover Of The Year’ title went to none other than Big Bang‘s T.O.P!

END_OF_DOCUMENT_TOKEN_TO_BE_REPLACED 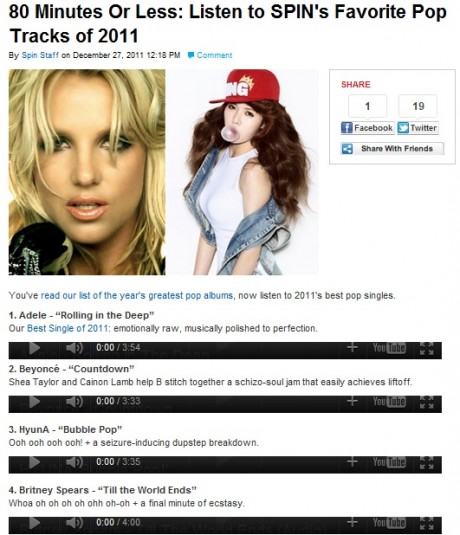 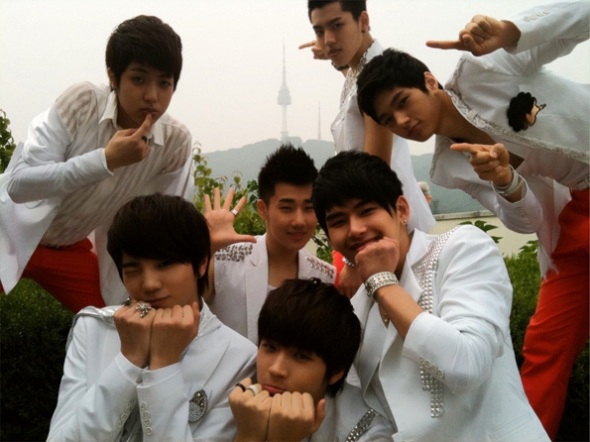 INFINITE, who has experienced a tremendous surge in popularity lately will be featured in an upcoming issue of W Korea magazine.

END_OF_DOCUMENT_TOKEN_TO_BE_REPLACED 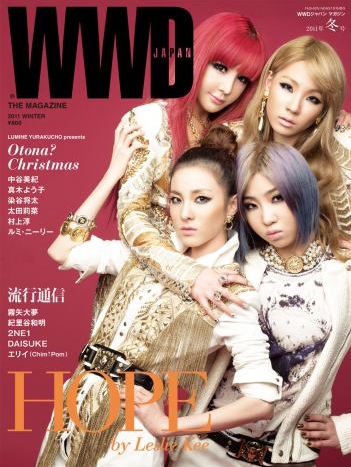 The ladies of 2NE1 have become the first Korean artists to grace the cover of popular Japanese fashion magazine, ‘WWD Japan‘!

2NE1 were chosen as cover models for the magazine’s winter issue, which allowed them to  join the ranks of many other famous women in Japan who previously graced the cover such as professional skater Asada Mao and actress Miyazawa Rie.

For their pictorial, 2NE1 wore French brand Balmain, which gave them an elegant gloss to their fierce charisma. Reportedly, the members’ outfits had cost around 25 million yen (approximately 322,872 USD).

In related news, 2NE1 will join fellow YG Entertainment artists and perform at the ‘YG Family Concert in Japan‘ on January 7th and 8th at the Kyocera Dome, and on January 21st and 22nd at the Saitama Super Arena.

Source + Photo: enews24 via Nate
[Thanks to everyone for the tip!] @ allkpop

[Cover Story] Rebel Without A Cause

I’ve never thought that I’m a sexy person…rather that I’m cute? (laughs). Even though I’m the same person on and off stage but sometimes I transform into someone that I want to be when I sing.”

Even though he uses his charisma to control the stage, and have fun with his members through his mischievous ways, but he is different from other people. He always gives the impression that he’s floating mid air, as if he’s not part of reality. People are automatically drawn to him by his gaze and the way he carries himself.

It’s because I have a lot of ideas, isn’t it?Actually, I feel the most comfortable when I’m alone but I’m always with the members when BIGBANG have activities, or surrounded by all the staff when I’m shooting for a movie. I was uncomfortable being around so many people previously, but my heart’s at ease now. I can accept it now.

END_OF_DOCUMENT_TOKEN_TO_BE_REPLACED 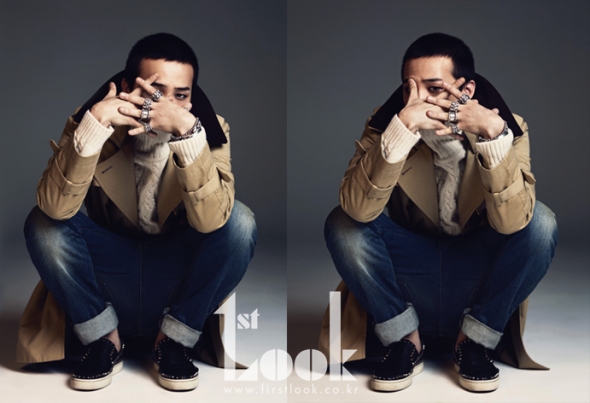 1st Look Magazine Cover Story: Rule The Nation
G-Dragon is suggesting a new standard in the Korean pop music industry. His thoughts on fashion, music, musicians and K-wave. His thoughts are bigger and broader than expected.
END_OF_DOCUMENT_TOKEN_TO_BE_REPLACED 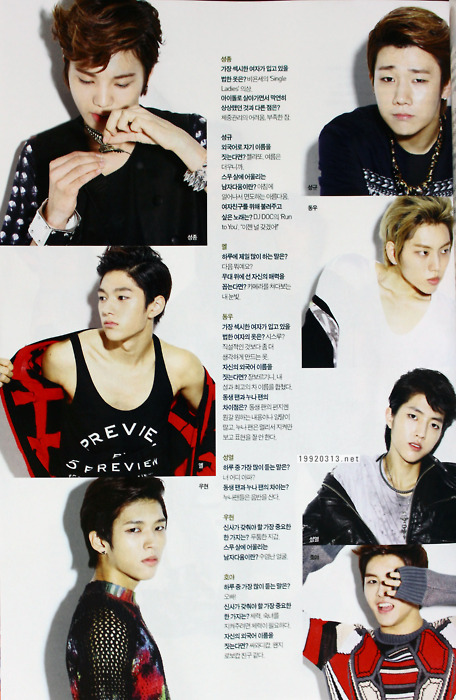 Q: Clothes that the sexiest woman would be wearing?

Q: As you’ve been living as an idol, is there something that differs from what you imagined?

A: The difficulty of keeping my weight and lack of sleep.