END_OF_DOCUMENT_TOKEN_TO_BE_REPLACED

BtoB’s Ilhoon and JOO confirmed to be siblings 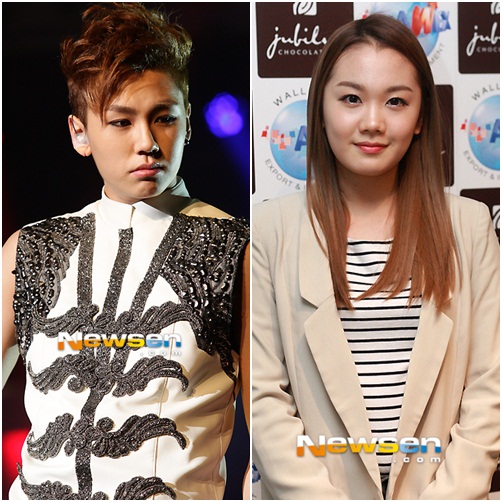 BtoB‘s Jung Ilhoon and singer JOO have been revealed to be siblings!

She added, “Please give lots of love to BtoB. To Ilhoon as well.” The photo she posted showed an autograph by Ilhoon with the short yet touching message, “To: My Nuna.” The BtoB member even made sure to include a small heart, making it obvious that the two are pretty close.

Ilhoon mentioned in a radio program the same day, “My older sister gives me a lot of support. She tells me to do what I want without interfering. If I happen to do something wrong, she’ll give me straight-forward criticism and cheer me on.”

END_OF_DOCUMENT_TOKEN_TO_BE_REPLACED

Leeteuk reassures fans that he will keep his cell phone number 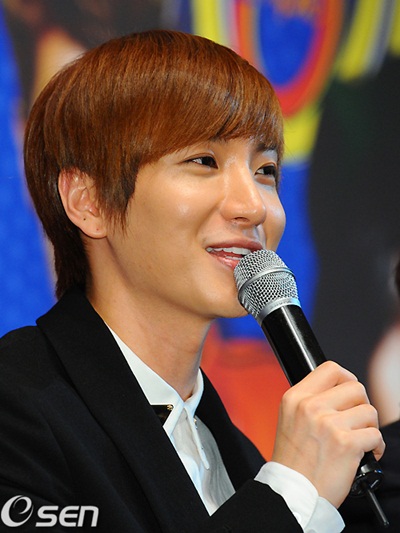 Super Junior‘s Leeteuk has revealed that he will continue to use his cell phone number that he revealed on April Fools’ Day.

END_OF_DOCUMENT_TOKEN_TO_BE_REPLACED

As a result, his phone broke down because of the massive amount of phone calls and messages it received at the same time.

SM Entertainment’s representatives stated about this, “Leeteuk’s Twitter account didn’t get hacked. The phone number he posted was his real phone number.” They continued by saying, “It looks like he wanted to play with fans and did this for April Fools’ Day. Since he got a lot of calls, his phone froze and broke down.”

Earlier today, Super Junior’s leader Leeteuk tweeted to fans, “010-4460-1117 is the popular celebrity Leeteuk’s real phone number. It’s 100% real. Please don’t be fooled by false phone numbers from now on, you can get in touch with me through this number.”

END_OF_DOCUMENT_TOKEN_TO_BE_REPLACED

Despite being in the midst of B2ST‘s busy world activities these days, member Junhyung stopped to share a message and a sel-ca with his fans!

END_OF_DOCUMENT_TOKEN_TO_BE_REPLACED 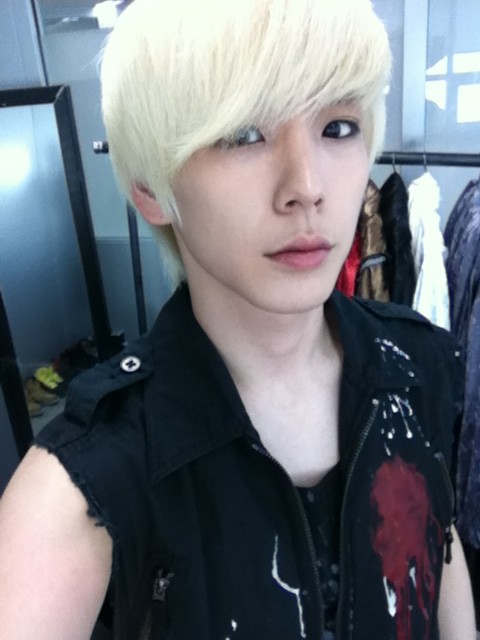 In Korea, it is now the season in which the new school year begins, and it seems that B.A.P‘s Himchan is determined to send off his fans on a great school year.

END_OF_DOCUMENT_TOKEN_TO_BE_REPLACED 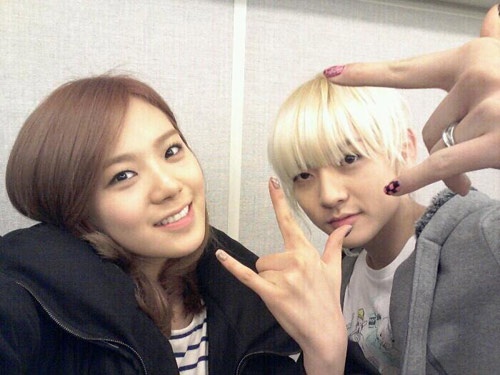 A playful photo of After School’s Lizzy and NU’EST’s Len has been posted. On February 13, Lizzy posted on her Twitter, “This is NU’EST’s Len, who is part of the Busan family. How can you be prettier than me? And it looks like Len received a manicure. Cutie, fighting,” along with a photo.
END_OF_DOCUMENT_TOKEN_TO_BE_REPLACED

On February 12th, a user created a Twitter account under the name, ‘realjonghyun90′ and started several tweets.  However, fans were skeptical (even now) since there are countless imposters of Jonghyun in the Twitter world.  Nevertheless, the rumor still managed to hype up thousands of fans as ‘realjonghyun90′ has already gained over 33,000 followers.

‘realjonghyun90′ uploaded the following photo and tweeted, “It’s really me….”

Fans and netizens left varying comments such as, “If you are the real Jonghyun, show us your handsome face“, “Omg, are these really your legs??“, and “Oppa, I trust you!”

END_OF_DOCUMENT_TOKEN_TO_BE_REPLACED

Jang Hyunseung thanks Big Bang members for their support

Big Bang and B2ST member Jang Hyun Seung‘s friendship has touched the hearts of many netizens.

Jang Hyun Seung tweeted on the 5th, “Truly thankful ungahdeul.. I’m so energized! Go! BEAUTIFUL SHOW..!”, and he revealed the photo above. (Ungahdeul: It’s a cute way of saying hyung in a plural form. It’s a slang btw.)

The photo shows a flower arrangement that Big Bang members have sent to congratulate B2ST’s concert. The messages are directed to Jang Hyun Seung, whom the Big Bang members have personal relationships with and the messages read, ‘Jang! Hyun! Seung! Jjang!’, ‘Big Bang Ungahdeul’, and ‘Our dongseng hwaiting crazy cheek’. The messages clearly show their brotherly love and it’s heartwarming to see that their friendship is still strong. (The last message could have been ‘Crazy Clown’, depending on what Big Bang tried to say).

Big Bang members and Jang Hyun Seung were all trainees in YG before either B2ST or Big Bang debuted. Jang Hyun Seung was eliminated in the final round of selection, but he later debuted triumphantly as a member of B2ST.

END_OF_DOCUMENT_TOKEN_TO_BE_REPLACED

The boys are currently starring in Mnet’s ‘Sesame Player 3’, where for 12 weeks, they’ll embark on various missions to increase their Twitter followers.

The goal is actually part of a contract B1A4 made with ‘Sesame Player 3′. According to this contract, “B1A4 will not hide things about their personal lives on the show”, “B1A4 will work hard in making impersonations and utilizing other talents to bring laughter to their fans”, and “Absence without leave and refusal to film will not be acceptable.”

END_OF_DOCUMENT_TOKEN_TO_BE_REPLACED 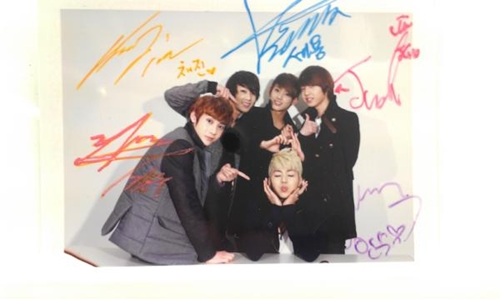 Rookie boy group MYNAME shared a new photo with their fans to celebrate 100 days in the music industry.

On February 3rd, the boys posted the above photo via their official Twitter page and wrote, “Hey everyone, it has finally been 100 days since MYNAME started out on ‘M Countdown’! I think it was right about this time, too. We promise never to lose focus and work harder to show you better efforts for our next album. We love you.”

MYNAME is a boy group produced by singer Hwanhee, and consists of members Seyong, Insoo, JoonQ, Chae Jin & Gunwoo. Although still rookies, they are new rising stars in the K-pop world, and have received interest from overseas as well.

END_OF_DOCUMENT_TOKEN_TO_BE_REPLACED

Upon the video’s release, SE7EN tweeted,

SE7EN’s call for support was answered as stars began to send in their messages and retweets of support.

END_OF_DOCUMENT_TOKEN_TO_BE_REPLACED

bigbangupdates>>>>NOTE: Laurieann Gibson is a famous choreographer known for working with Lady Gaga, Diddy & Keri Hilson. She was recognized for her appearance at Diddy’s “Making The Band”

END_OF_DOCUMENT_TOKEN_TO_BE_REPLACED

On January 14th, leader Jung Yonghwa wrote a long message of thanks to their fans via CNBLUE’s Twitter.

“It’s already been two years,” he said. “I remember when we were recording and getting ready for our showcase two years ago. I can’t believe that time has passed so quickly, and I know that we still have a long way to go.”

He continued, “To the fans who have been with us for two years — Thank you so much for supporting us, and we hope that you will stick with us till the end. We will be back with a new album soon, so please support us and give us lots of love. To my bandmates Jong Hyun, Jung Shin, Min Hyuk – let’s continue to work hard!”

END_OF_DOCUMENT_TOKEN_TO_BE_REPLACED 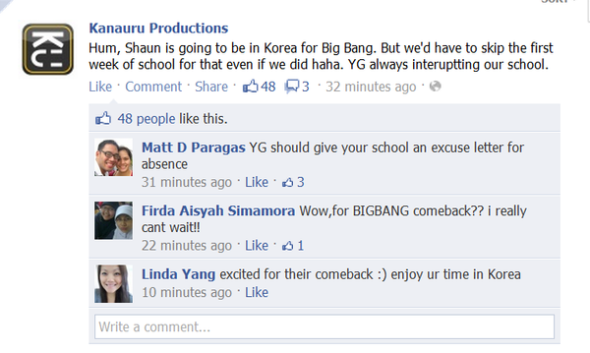 END_OF_DOCUMENT_TOKEN_TO_BE_REPLACED

B.A.P’s Zelo shares a selca of the boys heading to Malaysia

Fans from all over the world have been leaving messages on Zelo’s Twitter, pleading for the boys to come perform at their respective countries as well.

END_OF_DOCUMENT_TOKEN_TO_BE_REPLACED

Choi Siwon shared the above photo via his Twitter page on the 27th and wrote, “#nowplaying Sung Si Kyung – Memory.. keke”

The photo was a collection of smaller photos in which the two display ‘skinship’ with hugs and even kisses on the cheek, hilariously making the two seem like a loving couple.

The Super Junior members are known to be like close brothers, but this photo definitely confirmed the brotherly love among the boys.

END_OF_DOCUMENT_TOKEN_TO_BE_REPLACED

MBLAQ‘s maknae Mir revealed to his fans that he hangs out with INFINITE‘s Woohyun through a special photo.

On December 17th, Mir updated his Twitter with a selca and a caption that read, “This is the first time, I’m taking a photo with Woo Hyun…”

With both idols born in 1991 and in related fields, it seems like they managed to forge a friendly relationship.

Fangirls ogled over the photo as they commented, “Wah, so cute!“, “You two are so adorable, especially Mir’s friend“, and “Please take a photo with Shinee Taemin next *O*”

Boyfriend made their “I’ll Be There” comeback on the December 11th episode of SBS‘s ‘Inkigayo’ and were greeted by a special surprise from their Starship Entertainment seniors.

SISTAR’s Twitter updated with a group photo of the two groups along with the message, “Visited ‘Inkigayo’ to support Hyorin and Boyfriend!!!!! Boyfriend ‘I’ll Be There’ daebak!!! ^^.”

Boyfriend commented, “Thank you so much for coming despite your busy schedule. It was a source of strength for us.”

END_OF_DOCUMENT_TOKEN_TO_BE_REPLACED

During their Osaka concert, Super Junior‘s Donghae found a few seconds to have some fun with labelmate Sulli from f(x) with a series of adorable selcas.

“With Sulli before the concert in Osaka^^,” Donghae tweeted. In the photo-booth shots, both Donghae and Sulli are dressed similarly and pose in a variety of wacky shots, looking like two siblings with their similar large eyes and well-shaped jawline.

“Both of you are so cute! You do look like siblings,” enthused a netizen. “Sulli keeps on getting prettier,” said another. Super Junior is currently in Osaka for their ‘Super Show 4‘ concert.

A recent tweet from 4minute‘s charismatic dancer HyunA has fans buzzing about her relations with B2ST‘s Hyunseung.

On December 8th, HyunA uploaded a couple shot of her and Hyunseung on her Twitter and wrote, “I forgot to upload this yesterday.”

The duo have already caused a stir back in late November, when they locked lips during a performance at the MAMA 2011.  Fans were speculating all sorts of things, but this new couple shot has further hyped the buzz surrounding these two idols.

Regarding this matter, netizens commented, “They might be dating“, “They really look close“, and “I wouldn’t mind if they went out.”

END_OF_DOCUMENT_TOKEN_TO_BE_REPLACED 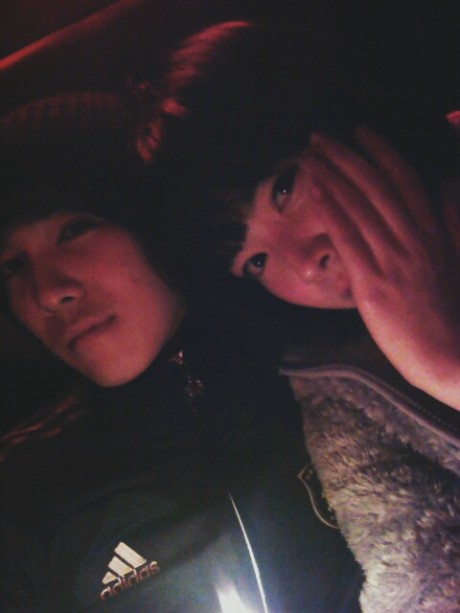 On November 29th, F.T. Island‘s Lee Hongki re-tweeted his sister’s message which read, “A date with oppa“, and provided links to their two selca shots.

END_OF_DOCUMENT_TOKEN_TO_BE_REPLACED 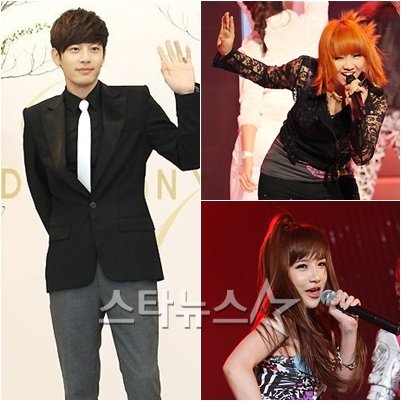 On November 30th, 2NE1′s Minzy tweeted, “Thank you to everyone who loves our music!“, to which Se7en replied, “Congratulations 2NE1! Get a good rest and come back safely!!,” showing his support for the group.

Se7en also tweeted to Park Bom, “Congrats Bom!! Have a good night and come back safely,”

Netizens commented, “Of course, YG Family! It’s good to see that you guys are close“, “Congratulations 2NE1!“, and “Oppa, you have to start activities again so you can sweep some awards too!“.