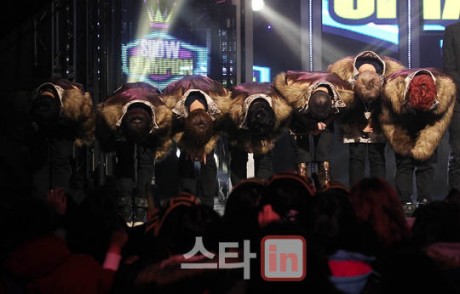 By now, anyone who’s a fan of K-pop is aware of 7-member idol group Block B. One of the boys’ interviews which took place in Thailand January 30th has stirred major controversy, and the boys have been receiving slanderous remarks from the public and the media alike.

The most sarcastic of remarks said, “They sure did their noise marketing properly,” deeply upsetting the members and their agency. When Star In caught up with Block B backstage at Mnet‘s ‘M! Countdown‘, all the members wore long faces. When approached for an interview, their manager denied the request. Instead, Star In met with a high ranking representative from their agency to ask a few questions.

– Did you neglect to act upon the situation, knowing what happened?
▲ Not at all. I didn’t know at first because I didn’t travel with them to Thailand for the interview, but I was shocked upon seeing the fans’ criticisms. We were going to release an official apology on the 20th, but the controversy had already caught fire by the 19th. The attacks coming at us were so uncontrollable we didn’t know how to control the situation at hand. We got one step behind, and after that, everything got really difficult.

– Are you saying that this is unfair?
▲ No. We deserve to be criticized, 100%. I am responsible as well. The apology statement was typed online after the members personally wrote it by hand. The Block B members were heavily disciplined and they learned a hard lesson. But to see the netizens’ comments be turned into news articles without proof or confirmation was really hurtful.

END_OF_DOCUMENT_TOKEN_TO_BE_REPLACED 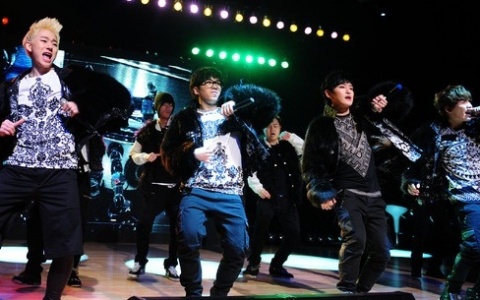 Block B recently released a Gorilla Dance version for their song “Nanrina“.

After releasing their mini-album “Welcome to the Block” on February 2, the Gorilla Dance move featured in their title track “Nanrina” music video has quickly become the talk of the town.

The dance move and the attire that instantly hints at a gorilla has been gaining popularity even amongst elementary students.  It took a few months of modifications before the seven member group completed their gorilla dance to its current perfection.

BNS Entertainment states, “As the Hallyu Wave rises in popularity, fans making dance covers are popular, not just within Korea, but abroad as well.  It’s standard for a dance cover group to form as the singers rise in popularity.  As such, the requests from fans for a dance version of the music video is off the hook.  In response, we have prepared a dance version video for the fans to practice the gorilla dance.”

END_OF_DOCUMENT_TOKEN_TO_BE_REPLACED

Block B welcome fans into their dorm on ‘Mnet Wide’ 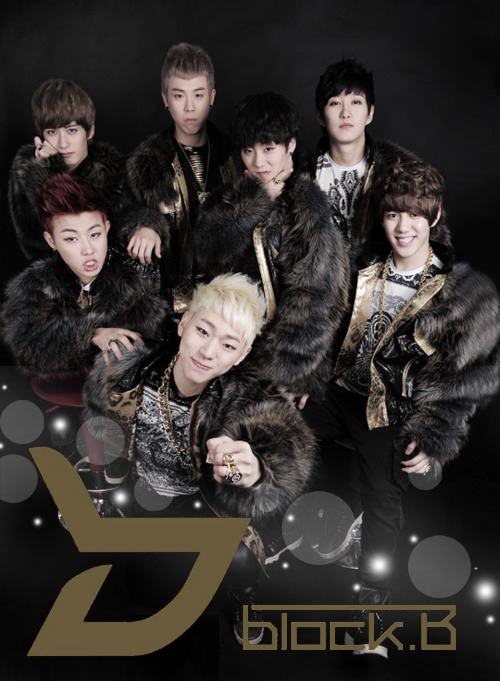 The boys of Block B welcomed fans into their living space!

‘Mnet Wide‘ recently visited the dorm of Block B and the members revealed some never-before-seen secrets to their dorm, including some surprising possessions belonging to ‘baby face’ member Taeil.

Though these talented idols are young, they pride themselves in being responsible. They complete their household chores, but know how to include some ‘hip hop’ to their every day routine.

And as professional performers, Block B rehearses day and night to perfect their moves for their next live performance.

END_OF_DOCUMENT_TOKEN_TO_BE_REPLACED 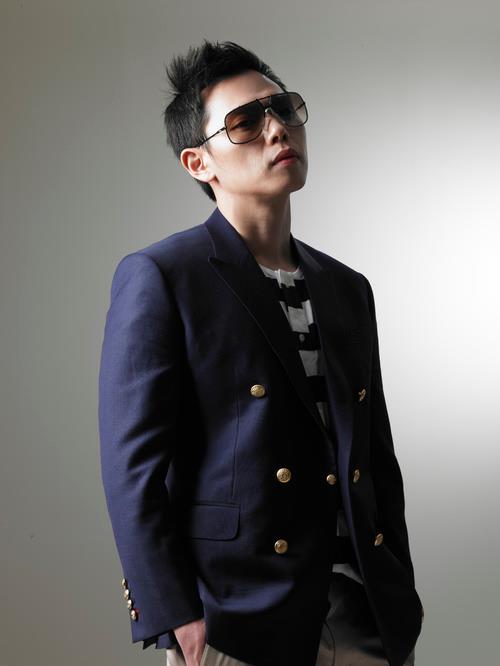 Block B and their agency chief, Cho PD, recently appeared on MBC‘s ‘Lululala‘, where they showed off their entertainment skills.

Cho PD made his first foray into entertainment programs through ‘Lululala’, despite making his debut as a singer 14 years ago. ”I don’t have any regrets. Everyone including myself must make concessions to obtain good results,” he expressed, demonstrating his dedication to helping Block B’s promotions as much as possible.

Cho PD also revealed that he gave permission for the Block B members to produce their own songs. Though there was some backlash from those who believed that it was a risky move, Cho PD persisted in making this happen.

As the head of Block B’s agency, Brandnew Stardom Entertainment, Cho PD got to witness firsthand the trials his group had to face during their debut period. ”When Block B debuted, I criticized the producers for not giving credit to the members who composed and produced the song; the producers responded by pulling out, taking their songs with them. It was an uncertain situation where the Block B members suffered a lot.”

END_OF_DOCUMENT_TOKEN_TO_BE_REPLACED 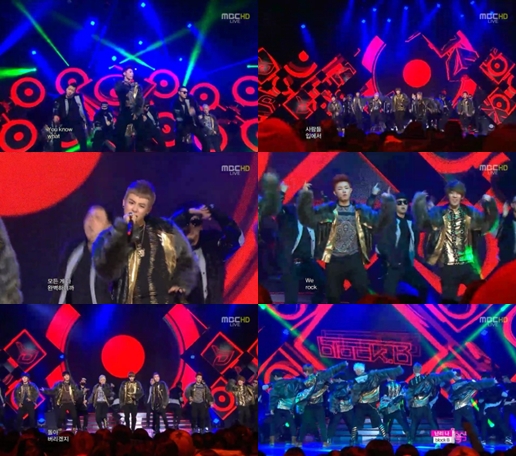 The seven boys of talented hip-hop group Block B made their return on the February 4th edition of MBC‘s Music Core with a performance of “Nanrina” from their second mini-album titled ‘Welcome to the Block‘. Fans would normally be happy about this but many Block B fans were angered over their perceived mistreatment of the boys.

Block B opened the show on Music Core, and some fans took this as an insult because Block B is a hot group making their return and usually the opening of the show is reserved for lesser known artists. Additionally, fans didn’t like the fact that the important dance routine from the beginning of “Nanrina” was cut out. After the broadcast was over, many netizens immediately took to online message boards and utilized SNS to share their angry thoughts.

Netizens commented, “I was so surprised that they cut out the most important dance part. I was also really upset that they put Block B first over the lesser known artists,” and “The cameramen didn’t even properly capture the members performance.”

Block B has showed power and compelling choreography through “Nanrina”. Member Zico also had a huge influence by producing 5 of the 6 tracks on their new mini album.

END_OF_DOCUMENT_TOKEN_TO_BE_REPLACED

Cho PD, the mastermind behind Block B, has revealed that he once inquired about a loan for the first time in his life.

Cho PD said that he estimated the amount of money it would take to push the seven-member idol group and agency Brand New Stardom to the top; the figure made him think about putting in a loan application for the first time in his life.

He stated, “I’m not paying a monthly installment for my car, nor do I have any loans right now. However, I looked into how much money I could borrow by using our agency office as collateral, so that I would not have to receive help from outside sources.”

END_OF_DOCUMENT_TOKEN_TO_BE_REPLACED 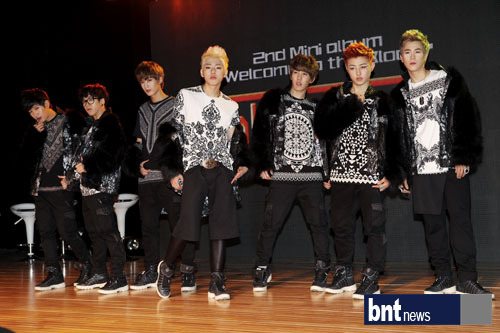 Block B held an exciting comeback showcase for their new mini-album, “Welcome to the Block“. The showcase was comprised of performances and interviews, and it was during a Q&A session that member Zico addressed the issue of their banned songs.

To recap, the Ministry of Gender Equality and Family (MOGEF) had banned several songs from their debut digital album. Additionally, two songs from their comeback album, “LOL” and “Did You or Did You Not“, were also banned by both the MOGEF and KBS.

Leader Zico, who produced the album, explained, “It’s not that we don’t consider the regulations when we’re producing the songs, but I did often think that our freedom of expression was being interrupted. Still, I do acknowledge that as as a producer that creates songs meant for the public, it was a shortcoming of mine to not have paid more attention to the regulations.”

He continued, “There still is that feeling of disappointment, but I’m not going to remain stubborn blindly. I’ll still try to protect Block B’s color; it’s just that since our music is meant for the public, I will try to consider aspects to their tastes.”