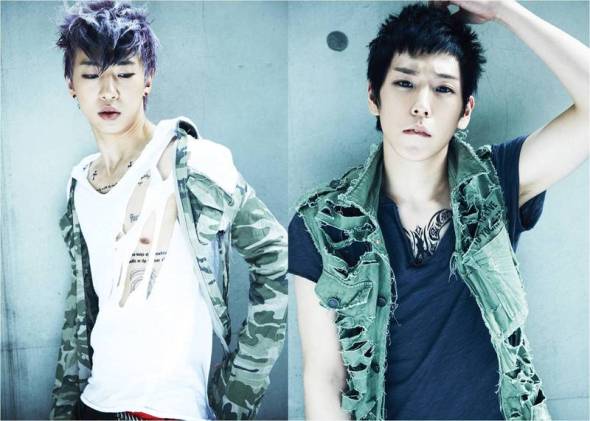 Prior to the release of B.A.P‘s comeback on April 27th, B.A.P members Bang Yongguk and Himchan have released new photos of themselves, giving fans a clear look at their new hair color, and getting crowned as “Namshin-dols,” or beautiful faced idols.

On April 20th, B.A.P released the first music video teaser for their 2nd single, “Power,” soon after revealing the member’s image teasers. The teaser has made fans highly anticipate their comeback, and the new photos of the grunge-looking Bang Yongguk and Himchan have excited fans yet again.

Both males are seen wearing worn and torn up outfits with tattoos painted underneath their shirts, showing BABYs (B.A.P fans) the group’s radical transformation from “Warrior.”

Bang Yongguk and Himchan have both changed their hair colors from their blonde to light purple and black hair respectively. It has also been reported that Himchan has lost 5 kilograms in preparation of their comeback, which can be seen through his slimmer face.
END_OF_DOCUMENT_TOKEN_TO_BE_REPLACED 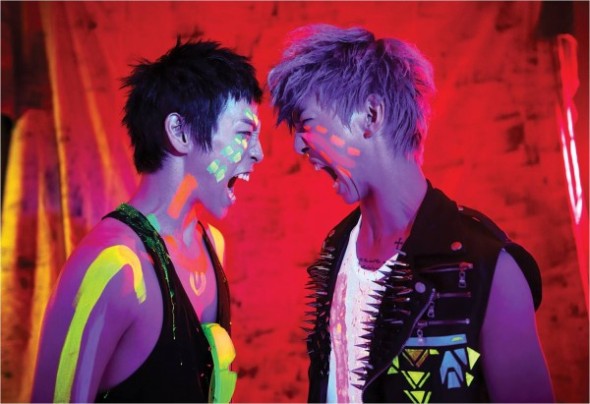 With just 10 days left until their comeback, B.A.P. has finally dropped some clues as to what’s to come with a brand new teaser image featuring Himchan and Bang Yong Guk!

TS Entertainment officially unveiled dates for the group’s comeback yesterday and has updated today with an image of the ’90 line of the group. Pictured screaming at each other against a bright red and neon backdrop, the boys are adorned in body paint that gives off a fierce and savage feel, definitely heightening their powerful images.

More than anything, fans will be happy to see new hair styles, as Himchan has finally let go of the group’s characteristic blonde hair and has gone for a dark black change.

Officials stated, “There are exactly 10 days until the release of the album and their first broadcast. We are now officially beginning their comeback promotions. Slowly, we will be revealing the transformations of B.A.P.”

END_OF_DOCUMENT_TOKEN_TO_BE_REPLACED

In Korea, it is now the season in which the new school year begins, and it seems that B.A.P‘s Himchan is determined to send off his fans on a great school year.

END_OF_DOCUMENT_TOKEN_TO_BE_REPLACED

B.A.P’s Himchan revealed to be a graduate of top tier arts schools

B.A.P member Himchan (22) has been revealed to be a graduate of national art schools.

The National Traditional Music Junior High School and the National Traditional Music High School are known for being government-established national arts education centers  in Korea; meanwhile, Himchan’s university is also government-affiliated, as it is run by the Ministry of Culture and Tourism. The Korea National University of Arts boasts a prestigious alumni roster, which includes Jang Dong Gun, Lee Sun Gyun, Lee Jung Bum, Nah Hong Jin and many other talented entertainment leaders. Nicknamed as the “Seoul University of arts schools,” it is undeniably the most renowned Korean college in the arts field.