Kim Hyun Joong to release a thank you single, “Marry Me” 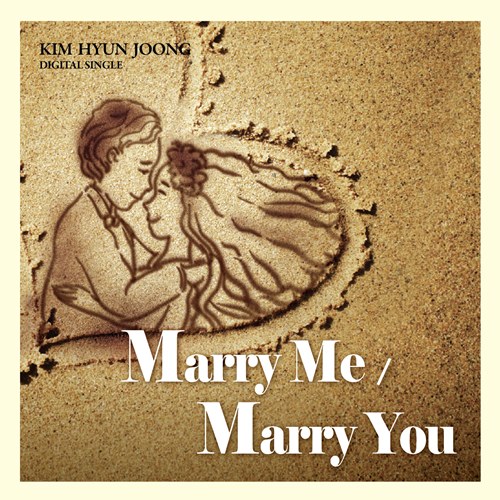 To thank fans for the tremendous success of his “Break Down” and “Lucky” albums this year, Kim Hyun Joong will be releasing a digital single titled “Marry Me“.

Having personally participated in the production of the single, “Marry Me” carries an acoustic melody with lyrics promising eternal love for his fans.

The single also contains a music video utilizing sand animation as well as fan-submitted photos. Kim Hyun Joong previously held an event on his homepage, asking fans to submit photos of the most happiest moments of their lives. 1,000 of those submissions were chosen to be included in his new music video.

“Marry Me” will be released online on December 15th, along with two different music videos.

Recently, we reported that Kim Hyun Joong was offered the lead role in TV Chosun‘s upcoming drama, ‘Speed‘. It’s now been revealed that the star had declined the part due to a cramped schedule.

On December 7th, director Shin Je Kwang of KeyEast Entertainment said, “It’s a good work so we examined it, however, Kim Hyun Joong will be releasing a Japanese album in January and plans to move into Chinese promotions in February and March. Therefore, it has been decided that working on a drama with his current schedule would be too much.”

‘Speed’ is scheduled to air in March and April of next year. Yang Yun Ho (of KBS2TV‘s ‘Iris‘ fame) will directing this drama about competitive race car drivers and their crossed fates.

While Kim Hyun Joong has declined the offer, actor Lee Jung Jae and SNSD‘s Sooyoung have signed on for the series.

According to a broadcasting management representative, SS501 leader Kim Hyun Joong has been cast as the male lead in TV Chosun‘s new K-drama ‘Speed‘, written by Ma Jin Won along with Lee Dong Hwa and directed by Yang Yoon Ho.

The representative informed MyDaily during a phone interview on the 5th, “His agency has agreed to Kim Hyun Joong taking on the new role, but the formal contracts have yet to be signed at this point in time.”

Kim Hyun Joong’s agency KeyEast Entertainment remarked, “It is true that we received an offer and are optimistically looking through the script.”

‘Speed’ is a car-racing blockbuster drama and is receiving attention as it is directed by Yang Yun Ho who in the past has taken on projects such as ‘Wind Fighter‘, ‘Libera Me‘, as well as KBS 2TV‘s 2009 hit drama ‘IRIS‘.

END_OF_DOCUMENT_TOKEN_TO_BE_REPLACED

Kim Hyun Joong recently held a press conference revealing that he has signed with Universal Music Japan, and announced the expected release date of his first Japanese solo album.

The star had his first showcase in Japan on November 7th, and has been receiving numerous “love calls” from big record labels since then. Out of all the offers he received, Kim Hyun Joong decided to go with Universal Music, the label that houses Korean artists like SNSD, KARA, B2ST, 4minute, and Supernova.

Universal Music stated, “His powerful performance during his showcase in July left an impression. Kim Hyun Joong has a unique charm that is hard to find in other Korean idol groups that are currently promoting in Japan, so we’re sure his solo activities in Japan will be successful.”
Kim Hyun Joong will be touring around 8 more cities after his first concert in Osaka on the 9th, and will release his first Japanese solo album on January 25th of next year.

For those of you who aren’t familiar with Pepero Day, it’s an unofficial holiday in South Korea developed by Lotte Corporation, who manufactures Pepero snacks. Pepero Day is held on November 11th since the date “11/11″ resembles four Pepero sticks. It’s practiced mainly by young couples who exchange Pepero sticks and other sweets — in other words, it’s technically like a Korean Valentines Day.

Returning to Kim Hyun Joong’s gift, several proof shots emerged online, causing envy amongst fans. The gifts were made by Kim Hyun Joong himself, who then shared them with fans at the ‘Sharing Love Concert‘ on November 6th in Seoul Olympic Stadium. The Pepero snack box contains an autograph as well as a heart-warming message.

Jealous netizens responded with, “He cares so much about his fans~“, “I want a Pepero too“, “Those fans are too lucky“, and “This is why you can’t help but love him“.

‘Boyfriend’ twins talk about their ressemblance to Kim Hyun Joong

Twin brothers Kwangmin and Youngmin of rookie idol group ‘Boyfriend‘ have been highly praised for their resemblance to singer Kim Hyun Joong.

Ever since their debut, they’ve been dubbed as the ‘Kim Hyun Joong twins’. In fact, before they were singers, the boys guested on an SBS program, whose panelists pointed out that the boys looked very similar to the SS501 star. Kim Hyun Joong himself acknowledged that the twins did look like him, which drew even more interest from netizens and viewers alike.

During a recent interview with enews, Kwangmin and Youngmin remarked that those who felt they resembled their senior were “too kind“. “We saw him recently on a music program, and he was awesome. We thought to ourselves that we wanted to be like him in the future,” they said.

The twins continued, “Kim Hyun Joong is someone with a very strong aura, as well as a great stage presence. We want to follow in his footsteps, being loved and acknowledged not only in Korea, but overseas as well.”

END_OF_DOCUMENT_TOKEN_TO_BE_REPLACED

Kim Hyun Joong has announced that he will be adding additional concert dates to his Japanese tour next month thanks to an influx of fans who’ve been requesting for more.

Fans who weren’t able to purchase tickets the first time around continuously made requests, and his Japanese company responded by adding an additional stop in Tokyo.

From November 19th and 20th, he’ll be putting on three concerts at the Tokyo International Forum (A Hall) for a 5,000 member audience. Kim Hyun Joong will be performing songs from his two mini-albums, “Break Down” and “Lucky“.

END_OF_DOCUMENT_TOKEN_TO_BE_REPLACED

After focusing on his acting career, SS501‘s Kim Hyun Joong is more than ready to turn the focus back to singing. He’s been in high-drive lately, releasing back to back albums in the same year and delving into styles and concepts that most singers go through in double the time.

Why the rush? Kim Hyun Joong took the time to explain why, as well as some news on future releases through his interview with Segye Ilbo.

The singer stated, “First of all, I’m planning to release a ballad in December through a digital single with a unique music video to go with it. In January, I’m going to release another mini-album. Considering my schedule, I don’t have room to space them out. I’m also going on a tour next year to meet up with more of my fans so I’m trying to have some good songs under my belt before then. As for an official studio album, I think I prefer a mini-album with five or so songs.”

His recent “Lucky Guy” comeback was inspired by the movie ‘Ocean’s Eleven‘.  He stated, “You can consider the album mainstream, but also modern. My concept is freedom. I remember seeing the movie Ocean’s Eleven and just thinking to myself, ‘That’s it.’ I set the physical concept first and then began to collect songs.”

END_OF_DOCUMENT_TOKEN_TO_BE_REPLACED

SS501‘s Kim Hyun Joong is making a comeback with his second solo mini-album, ‘Lucky Guy‘. For this latest work, he experimented with a variety of genres, from the punk-rock feel of “Lucky Guy” to the sweet ballad, “I’m Your Man“.

END_OF_DOCUMENT_TOKEN_TO_BE_REPLACED 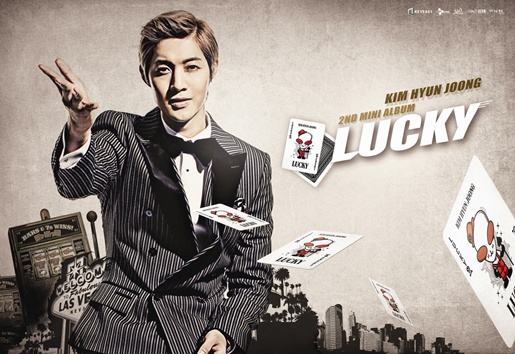 SS501‘s Kim Hyun Joong held a press conference commemorating the release of his 2nd mini-album, “Lucky“, where he discussed the goals he had for his latest work.

The 2nd mini album starts off with “Do You Like That” and “Lucky Guy”, two tracks that carry a pop-meets-punk rock flavor. They are then followed by the softer songs, “I’m Your Man” and “U”.

Kim Hyun Joong stated, “The 1st mini album showed you the first glimpse of my image as a solo artist, and my capability in being able to ‘fill up’ the stage by myself without having all the members of SS501 there. The 2nd mini album will focus more on music in itself; as in it’s meant to be listened to, rather than being a background track for the visual components.”

He continued, “I didn’t dream of being a rocker, but I’ve always liked rock before joining SS501. I was in a school band during middle school, and played bass at church. I wanted to become a musician behind a cool rocker. I want to incorporate more rock genre music into future concepts.”

END_OF_DOCUMENT_TOKEN_TO_BE_REPLACED 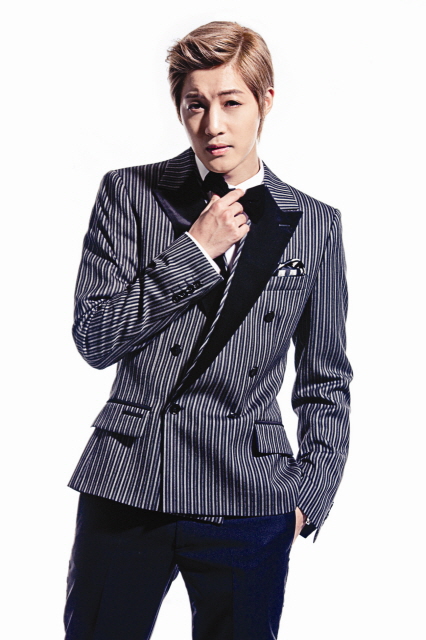 Kim Hyun Joong recently sat down with reporters to talk about his upcoming music video for “Lucky Guy”.

“‘Breakdown’ was a very powerful track, whereas ‘Lucky Guy’ is more of an upbeat song that I will be able to enjoy with fans… The concept this time around was inspired by the movie ‘Ocean’s Eleven’.”

He continued, “This music video was shot with a gambler concept, but although the background and atmosphere make it seem like it’s in a casino, in reality, I’ll be playing Blue Marble.” (Blue Marble is a Korean board game similar to Monopoly)

With his last mini-album selling 110,000 copies, Kim Hyun Joong holds the record for the highest figure of album sales out of all the solo artists this year.

END_OF_DOCUMENT_TOKEN_TO_BE_REPLACED

Netizens have recently been buzzing over a series of still cuts featuring SNSD‘s Seohyun and Kim Hyun Joong on the set of a CF.

It’s been revealed that the two stars were filming a CF for the cosmetics brand ‘The Face Shop‘, and were giving off a romantic atmosphere on set.

Although the two seemed to be a bit shy around each other, netizens commented on how good the they looked together, saying, “They both shine“, “It’s just a CF but I’m still jealous“, and “I wonder what Jung Yong Hwa will say?”

In the photos, the two are seen acting out a scene while facing each other, and Seohyun is looking beautiful and mature with her long wavy hairstyle and delicate soft pink dress. Kim Hyun Joong is also showing off his handsome looks while wearing a yellow jacket.

Who makes the most money? Jun Hyun of B2ST or G Dragon of Big Bang? 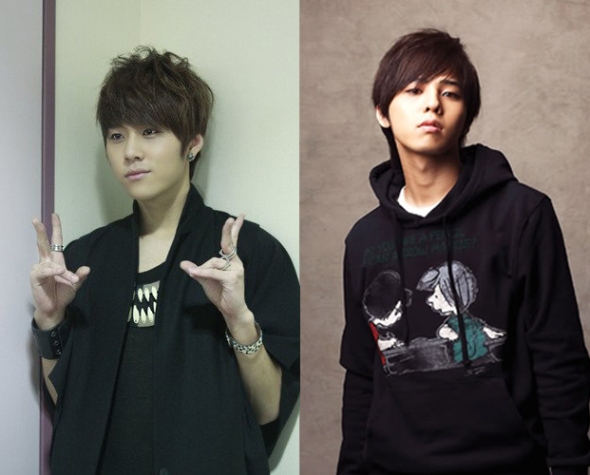 K-Star News reveals how expensive idols are in their broadcast.

SBS E!TV’s K-Star News, which will air on September 16, the idol with the most income will be revealed. It attracts much attention since it will analyze the idols’ income including their pay from commercials.

Kang Ho Dong’s retirement has been an issue in the entertainment world. After he has been charged of evading huge amount of taxes, many people are paying attention to other celebrities’ income.