On March 8th, pictures of ‘We Got Married‘ couple T-ara‘s Eunjung and actor Lee Jang Woo getting married in Indonesia surfaced online!

END_OF_DOCUMENT_TOKEN_TO_BE_REPLACED

During the ‘Roly Poly’ press conference that was held at the Seoul Press Center on January 4th, Hyomin remarked, “In the script, there is a scene where Lee Jang Woo and I confirm our mutual feelings for one another and share a kiss. He is currently married to fellow member Eunjung on MBC‘s ‘We Got Married‘, but she doesn’t know about the kiss yet,” which caused everyone in attendance to explode in laughs.

“It’s a bit uncomfortable knowing that he is my ‘brother-in-law’,” she continued. “I don’t know if I should have received permission from Eunjung unni.”

When asked what the most difficult part of rehearsing was, she remarked, “The hardest thing was that we had T-ara promotions at the same time, so there was never enough time for practice. We would rehearse in our dressing room and in our van… It was easier because members Jiyeon and Soyeon are in it with me. We were able to practice our lines together and talk about the musical. It was fun“.

END_OF_DOCUMENT_TOKEN_TO_BE_REPLACED 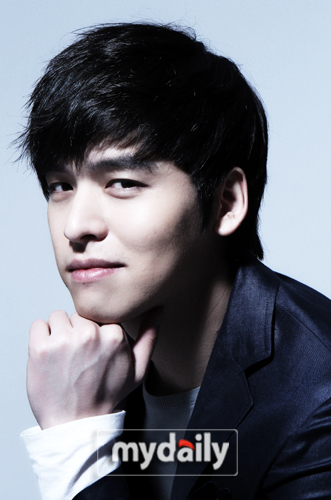 Actor Lee Jang Woo further proved that he is a loyal husband to MBC ‘We Got Married‘ wife, T-ara‘s Eunjung.

In order to display his loyalty to his wife Eunjung and his T-ara ‘in laws’, Lee Jang Woo has agreed to play a role in their upcoming musical, ‘Roly Poly‘.

The musical will tell the stories of seven older women who grew up in the 80′s including their past experiences with love and friendship. Singer Jang Hye Jin and actress Park Hyemi have also been cast for the musical, as well as Davichi‘s Kang Minkyung and T-ara’s very own Jiyeon, Soyeon, and Hyomin.

Actor Lee Jang Woo who is currently playing the role of the ‘bad guy’ in KBS 2TV‘s ‘Man of Honor‘ will be making a complete transformation into a romantic gentleman for ‘Roly Poly’.