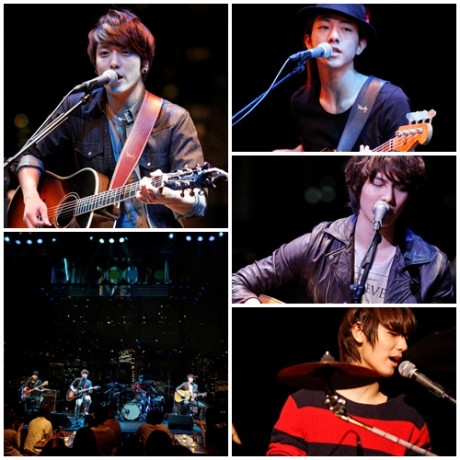 Korean rock band CNBLUE recently made an appearance on MTV Japan‘s Unplugged, taking the title as the first ever Korean artist to appear on the show.

MTV Unplugged is a music program that features intimate, acoustic sets from world-class artists like Eric Clapton, Oasis and Mariah Carey. Japan’s own version of the program began its broadcast last July.

The boys played a 12-song set that included some of their Japanese hits like “Let’s Go Crazy”, “Try Again, Smile Again” and “Kimio”. In addition, the band also debuted the acoustic rendition for their Japanese major-label debut single, “In My Head”, as well as their newest number, “Where You Are”.

Aside from the boys’ flawless performance, CNBLUE made headlines with the number of ticket requests made for the show. Reportedly, they drew a whopping 15,000 applications from fans wishing to attend the show (MTV Unplugged Japan only accepts 150 attendees).