During a recent recording for KBS JOY’s “The Chair Korea Season 2,” Dal Shabet’s Subin expressed her feelings for Big Bang’s G-Dragon. During a past episode of “Strong Heart,” Subin talked about appearing in Taeyang’s music video for “I Need a Girl.” In the music video, she was seen leaning on G-Dragon, causing quite the stir among netizens who were curious about their relationship.

END_OF_DOCUMENT_TOKEN_TO_BE_REPLACED

Subin who was previously an extra in Taeyang‘s “I Need A Girl” MV played the role of a seductive female.

The Dal Shabet member remarked that she was on set of the MV shoot waiting for filming to begin, when she saw a bright light from one side of the room.

“There was this bright light on one side of the set, so I looked over and lo and behold, Big Bang’s Taeyang was over there,” she said. “I kicked myself for not trying harder that morning.”

END_OF_DOCUMENT_TOKEN_TO_BE_REPLACED 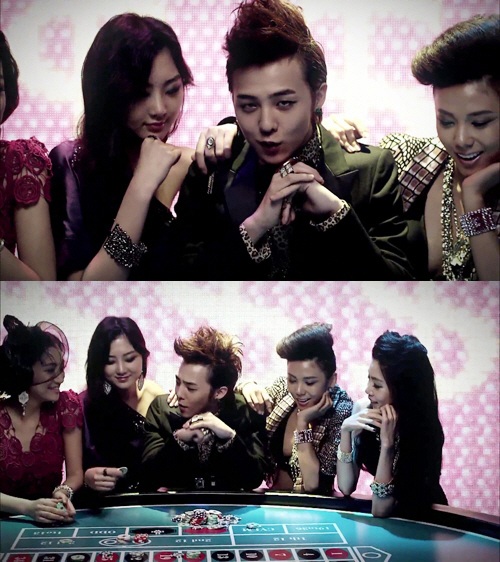 Photos of girl group Dal Shabet‘s maknae Subin and Big Bang‘s G-Dragon are causing quite the stir amongst netizens.

On December 19th, the photo above surfaced on an online community site with the caption, “What kind of relationship do Subin & G-Dragon have?”

In the photo, Subin is dressed in a violet off-the-shoulder dress and is displaying her mature feminine appeal. The two look to be close, as she has her hand casually resting on G-Dragon’s shoulder, sitting in front of a casino table. The photo was actually a screen capture from Taeyang‘s “I Need A Girl” MV, and Subin who was working as a model back then was featured in the video with a few other models.

Netizens who saw the photos left their comments such as, “She was only 17 back then; she looks really mature“, “There are a lot of girls surrounding him, but Subin definitely stands out“, “and I guess they don’t call her ‘giant baby’ for nothing“.