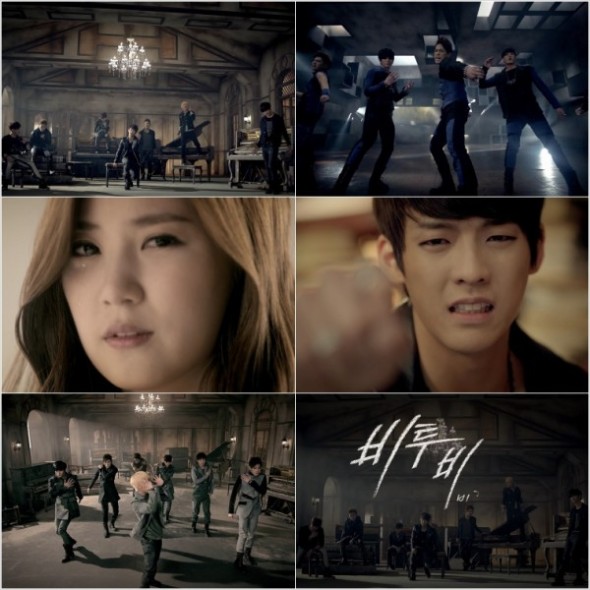 Cube Entertainment‘s newest 7-member male idol group, BtoB, is already stirring up much attention with the release of their double title tracks “Insane” and “Imagine”, and the airing of their ‘Premium Launching Show’ through YouTube.

END_OF_DOCUMENT_TOKEN_TO_BE_REPLACED 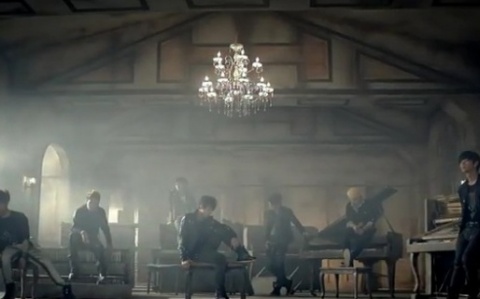 In the photos, you get to see Lee Chang Sub, Yook Sung Jae, and Peniel Shin for the first time. Seo Eun Kwang, Lee Min Hyuk, Lim Hyun Sik, and Jung Il Hoon made their first public appearance through jTBC’s “I Live in Chungdam-Dong.”

“BTOB features members between the ages of 18 to 23. The seven member boy group will showcase its skills and introduce a new dance genre with its emotional vocals and rap,” Cube Entertainment said.

In addition to the profile pictures, BTOB also unveiled a 43-second teaser video, giving a good idea of what to expect from this high-energy group. A Pink’s Chorong also makes a surprise cameo appearance, so make sure you check it out below!

END_OF_DOCUMENT_TOKEN_TO_BE_REPLACED

Yoseob & Eunji announce their ‘Be My Partner’ event 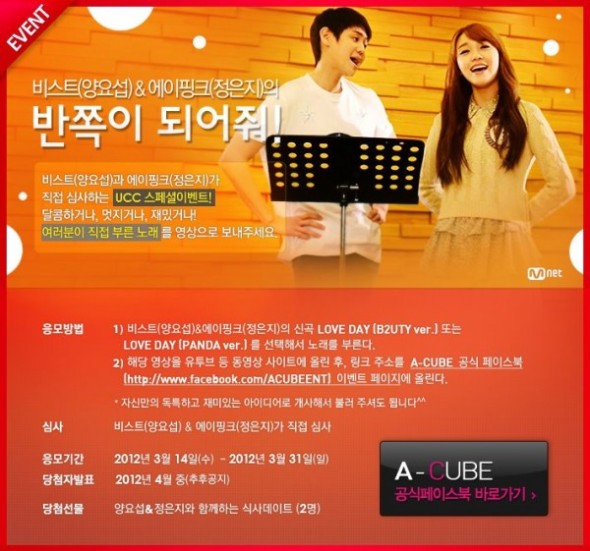 In addition to B2ST‘s Yoseob offering to buy dinner for a few fans, the official rules for the event have now been revealed. A special UCC (User Created Content) event named ‘Be My Partner‘ is being offered by A Cube Entertainment & Mnet.

The contest requires fans to sing a cover of Yoseob’s new collaboration song, “Love Day (Panda or B2UTY version)” with A Pink‘s Eunji, upload it (to a site such as YouTube) and then share the link on A Cube’s facebook event page.

Yoseob & Eunji will personally judge the videos and the top 2 winners will win a dinner date with Yoseob & Eunji.

The two idol singers recently released a video explaining the official rules for the ‘Be My Partner’ event.

END_OF_DOCUMENT_TOKEN_TO_BE_REPLACED

Which Girl Group Would Top the Hierarchy Chart?

If you were to create a girl group hierarchy chart, who would be your top pick?

According to a hierarchy chart that’s been quickly spreading online, Girls’ Generation and 2NE1 are the undisputed top two picks. This chart, dated February, 2012, covers 16 of the top girl groups and ranks them in order by five different categories, such as “Wall You Can’t Go Over (unbeatable, basically),” “Nationwide level,” “Socialite level,” “Mania level,” “the Maginot line.”

The top “Wall You Can’t Go Over” category is rounded out by Girls’ Generation at #1 and 2NE1 at #2. Closely following them in the “Nationwide level” are T-ara at third, the Wonder Girls and Kara at fourth, and f(x) at fifth. This shows the girl groups popular in Japan ranking higher than the Wonder Girls, who’s mostly spent their time in the U.S. lately.

The next category, “Socialite level,” is comprised of Secret and SISTAR at the same level, followed by 4minute. After School is ranked slightly above the “Mania level,” with A Pink, Girls’ Day, Rainbow, and Dal Shabet trailing them to complete the “The Maginot line.”

END_OF_DOCUMENT_TOKEN_TO_BE_REPLACED 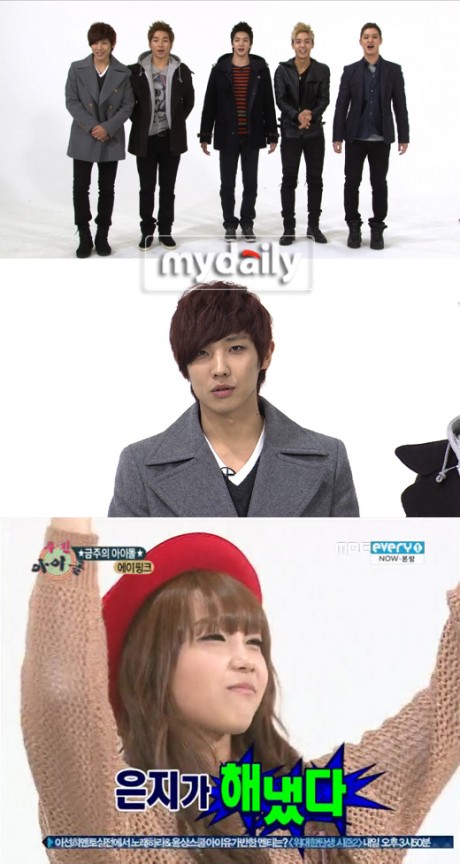 The MBLAQ members have their eyes on girl group A-Pink.

The boys who are actively promoting their song “This Is War” recently guest-featured to film the February 11th episode of MBC Everyone‘s ‘Weekly Idol‘.

When MC Jung Hyung Don asked if there were any girl groups that have caught their attention as of late, MBLAQ leader Seungho and fellow member G.O. agreed that A-Pink is one of their favorites groups.

END_OF_DOCUMENT_TOKEN_TO_BE_REPLACED 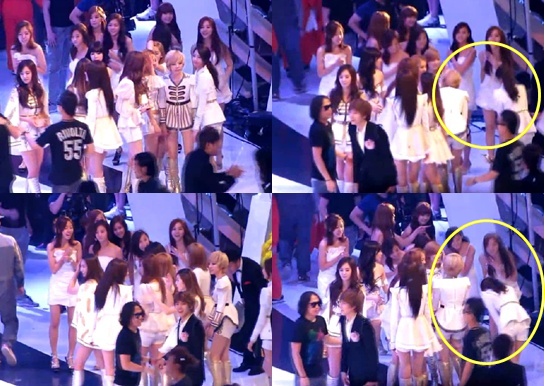 SNSD was recently spotted bowing in a respectful 90 degrees to their juniors, A Pink, while at an event.

An online community board shared a video of the moment under the title, ‘SNSD Bowing to A Pink’. In a culture that’s centered around hierarchy and respect, this short moment was enough to attract several headlines, since it’s not expected for seniors to bow down to such a degree to their juniors.

In the video, A Pink greets their seniors, and Sunny and YoonA immediately respond by bowing back.

In a previous radio show, the girls once stated, “Rookie groups have a hard time approaching us so we always bow back to them in 90 degrees. It’s only been four years since our debut so we’re not in the position to be receiving bows, but bowing right with them.”

Netizens commented, “They’re not just talk, they’re action as well,” “SNSD is known for their respectfulness,” and “Very friendly atmosphere.”

A Pink Talks About Their “My My” Comeback 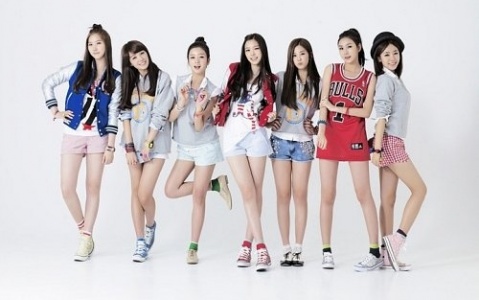 It goes without saying that A Pink’s concept of nostalgia worked, especially since they managed to take home the rookie award at the “2011 MAMA.” Before, the girls had claimed that they were a bit shy and embarrassed to be acting so cute for the camera, but in their latest interview, they admitted to feeling at home now.

The girls are currently promoting “My My” from their second mini-album, “Snow Pink.” Much like their debut concept, the girls remain as cute as ever, but with improvement shown in their stronger vocal and choreography skills.

Idol groups have been releasing singles back to back in order to stay in the spotlight, but A Pink opted to take a four month break. “We promoted for three months and went on hiatus for four. We hadn’t gotten our name out there yet, so we were afraid and nervous about being forgotten.”

A Pink continued, “During those four short months, so many new idol groups have emerged. We were just a bit greedy for a rookie award but gave up on the thought thinking that it was out of our reach (laugh). Watching the music programs every week only made us want to get back to the stage that much faster. We were also sorry for making our fans wait for so long. All of our feelings were reflected in our album, however.”