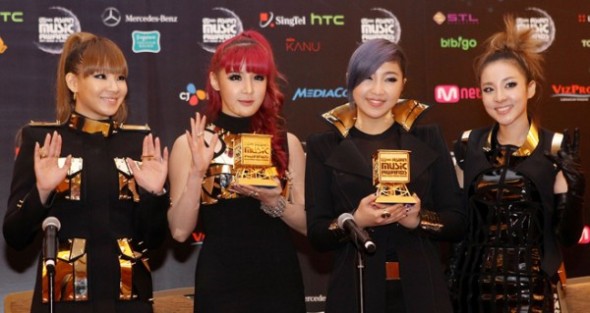 MTV Iggy has recently posted their list of ’10 International Collaborations That Blew Our Mind in 2011′. Although there were many amazing collaborations featured on the article, coming in at #1 were none other than 2NE1′s CL, will.i.am, Apl.de.ap with “Where is the Love” at the ’2011 MAMA’ (Mnet Asian Music Awards).

END_OF_DOCUMENT_TOKEN_TO_BE_REPLACED

This Sunday, December 18, at 8pm EST/ 5pm PST, Mnet US will be streaming a three hour long presentation of “Best of 2011 MAMA” on their Facebook page.

This show will feature exclusive behind the scenes footage and interviews. Mnet’s “Hello Pop!” VJ Chrissa Villanueva, who attended the event in Singapore, will host this program. 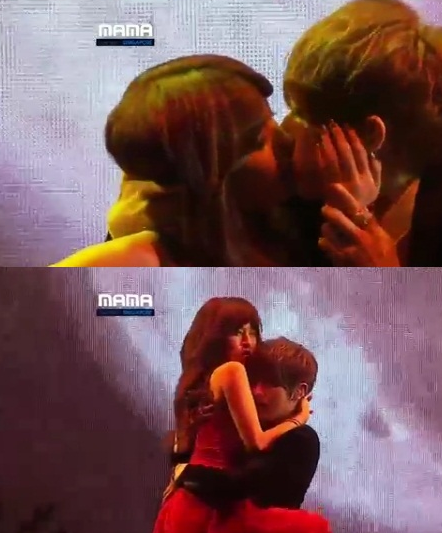 “Trouble Maker” duo HyunA and Hyunseung have worked up quite the storm after heating up the stage at the 2011 Mnet Asian Music Awards, shocking everyone with a sensual kiss in the middle of an intimate dance sequence.

However, scandalized fans can seek solace in a recent statement by a CUBE official, who confirmed that the HyunA and Hyunseung didn’t actually lock lips during their performance. “The kiss was not lip to lip, but actually lip to cheek.”

“The kiss was a decision made by the directors before the performance,” the representative went on to clarify. “This stage was special because it was a place to wrap up the successes of this past year and also debut a new unit collaboration. It was after the agreement with the directors that this kiss stunt was developed.”

The group is scheduled to debut on December 1st.

END_OF_DOCUMENT_TOKEN_TO_BE_REPLACED

The 2011 MAMA recently held at the Singapore Indoor Stadium was full of phenomenal performances by various Asian and overseas artists, however, the one that everyone continued talking about was the Trouble Maker performance from 4minute‘s HyunA and B2ST‘s Jang Hyun Seung. More specifically, their sultry dance performance which included a kiss between the two.

END_OF_DOCUMENT_TOKEN_TO_BE_REPLACED

On November 29th, Mnet hosted its 2011 Mnet Asian Music Awards (‘MAMA‘) at the Singapore Indoor Stadium, attracting stars and performers from both Korea and around the world.

END_OF_DOCUMENT_TOKEN_TO_BE_REPLACED

On November 29th, 4minute‘s HyunA and B2ST‘s Hyunseung shocked their fans with a racy stage at the ‘2011 MAMA‘ in Singapore — a stage that included a long, steamy kiss.

HyunA and Hyunseung brought out a risque performance to introduce their new project duo, ‘Trouble Maker‘. Dressed up in evening gowns and suits, the two danced provocatively against a moon-lit background.

Fans went wild over their very intimate choreography, which had Hyunseung touching HyunA’s legs, HyunA jumping onto Hyunseung and wrapping her legs around his waist, and finishing off with a passionate embrace.

Check out the performance for yourself down below!

END_OF_DOCUMENT_TOKEN_TO_BE_REPLACED

An organizer for MAMA commented that “After the spreading of the Korean wave, K-pop skyrocketed overseas, and the idols, rock groups, and hip-hop artists that made all this possible are all going to come out on stage and perform. This year’s concert is something people should not miss.” Furthermore, he said that “Through the MAMAs, people can experience a wide range of genres and feel the charisma and talent that all these idol groups carry.”

This year’s MAMA will be held on November 29 at the Singapore Indoor Stadium in Singapore, where not only the power of K-pop will be displayed but forces of pop from other nations as well, such as Singapore, Japan, Thailand, and thirteen other countries. Asian countries may be the ones participating, but the world will be watching with live streaming taking place in America, France, and seven other non-Asian continent countries.

Meanwhile the MAMA homepage is being flooded by votes of peoples’ favorite groups, with 500,000 votes being recorded on November 18, which only gives a hint to the explosion of energy and hype to be looked forward to on the 29th.

END_OF_DOCUMENT_TOKEN_TO_BE_REPLACED

Some of the biggest names in the Korean entertainment industry have confirmed their attendance to the prestigious 2011 Mnet Asian Music Awards (MAMA), which will take place on November 29th at the Singapore Indoor Stadium from 4 – 10 PM (Singapore time).

Local co-organisers MediaCorp VizPro International has revealed the list of attendees for the big event. So far, SNSD, 2NE1, miss A, HyunA, Super Junior, B2ST, and Kim Hyun Joong have all reportedly confirmed their attendance. Meanwhile, the K-media is reporting that Dynamic Duo and YB will also be there to rock the show.

The above list is by no means final, as the organizers revealed that more names will be revealed as the event date nears.

Most of the tickets have long been sold out since it was released for sale, but limited standing tickets are still available over at their official ticketing partner, SISTIC.

END_OF_DOCUMENT_TOKEN_TO_BE_REPLACED 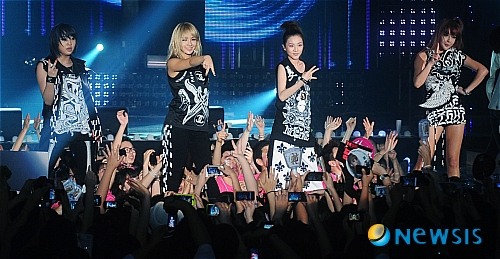 All eyes and ears are focused on the ‘2011 Mnet Asian Music Awards (MAMA)’ that is scheduled to take place at the Indoor Stadium in Singapore on the 29th.

More than 2,240,000 votes came in this year through MAMA’s official homepage (www.2011mama.com), which is more than 10 times the number of votes that came in last year.

END_OF_DOCUMENT_TOKEN_TO_BE_REPLACED

The two companies have been working out their differences over the past few years but have only recently shown real progress, with SNSD‘s recurring performances on M! Countdown as well as on Wide News and other live programs.

CJ E&M director Shin Hyung Gwan also noted, “We can say that MAMA is not an award show for certain entertainment companies but more of a festival to support the artists who are the most active.”

’2011 MAMA’ will be held on November 29th at the Singapore Indoor Stadium.

It’s that time of the year again, folks. ‘Mnet‘s Annual Music Awards’ (or ‘MAMA’) is gearing up to deliver a spectacular event at the end of November, but before they do, they’re concentrating on narrowing down this year’s most popular artists and songs.

END_OF_DOCUMENT_TOKEN_TO_BE_REPLACED

Mnet: “No problems with SM artists joining the MAMA”

After a long period of tense relations, SM Entertainment and Mnet finally resolved their dispute earlier this year. Now, everyone in the industry is watching to see if SM will allow their artists to make an appearance at this year’s ‘Mnet Asian Music Awards (MAMA)’.

Representatives of ‘MAMA’ responded with optimism over questions of SM’s participation this year. “We can’t announce official attendance lists yet, but there is no problem with SM artists joining the ceremony,” they said.

TVXQ is scheduled to perform at the ‘2011 Billboard K-Pop Masters‘ in Las Vegas on November 25th. Considering the fact that the ‘MAMA’ will be held two days after that, the likeliness of their attendance doesn’t seem high. Their labelmates are also fully booked with other year-end schedules.

END_OF_DOCUMENT_TOKEN_TO_BE_REPLACED

How to Catch MAMA 2011 in Singapore, Revealed! 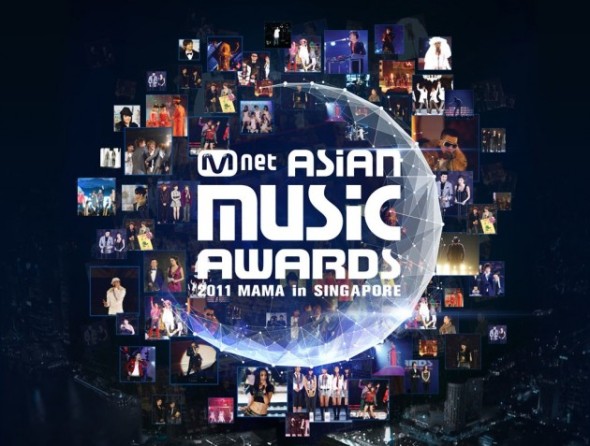 2011 Mnet Asian Music Awards  (2011 MAMA) is releasing a limited number of tickets for visitors who will be attending this star-studded, unforgettable ceremony.

As this is an Asian awards ceremony, other than Korean artists, the organizers will be inviting top Singaporean and other renowned international artists to the event.

In addition to the spectacular 4-hour awards ceremony,  there will be a 2-hour grand red carpet event, where fans can catch these stars in their full glamour and also get up close and personal with their idols.

Ticket sales for this long-awaited awards show will start on October 25, 2011. As this is Korea’s most high-profile event, the 2011 MAMAorganisers aim to allow more fans to participate in it. 5,000 seated tickets have been made available for sale. As this is no ordinary concert or awards ceremony, the organizers are sparing no effort, from the set-up of a magnificent stage to careful planning of camera and filming locations, to ensure a successful event.

END_OF_DOCUMENT_TOKEN_TO_BE_REPLACED

Last year, the ‘2010 Mnet Asian Music Awards (MAMA)’ was held at Macau, and this year, Mnet will be hosting the event in Singapore!

According to a majority of industry officials, the ’2011 MAMA’ will be held at the Indoor Stadium in Singapore on November 29th. Now that fans know the ‘when’, they’re curious about the ‘who’ — focus is now being put on whether or not SM Entertainment and YG Entertainment will be bringing their artists to the ceremony.

SM Entertainment has had a long standing conflict with Mnet, which was recently resolved this year. YG Entertainment, on the other hand, are undergoing several issues with their artists, making it highly likely that they’ll be sitting out this year.

Last year, the MAMA spent $4 million USD by holding their ceremony at the Cotai Arena and earned hot attention for being the first Korean awards ceremony to take place overseas. The event was broadcast in 16 different networks across Asia. As such, anticipation is definitely on the rise this year.